Smith Mountain Lake is one of the few places in the country where you can catch such big fish on medium-weight tackle.” That’s veteran fishing guide Dale Wilson describing what makes fishing SML so enticing for homeowners and vacationers, whether they are dedicated anglers or just folks who occasionally enjoy catching (and eating!) nice fish. Boasting deep clear water—about 250 feet deep at the dam and exceeding one hundred feet at many spots in main channels—and over 500 miles of both developed and undeveloped shoreline, SML is a great spot to enjoy fishing for a substantial variety of species.

Wilson has a basis for comparison: He has fished lakes all over the country with various tournament circuits, and has plenty of tips to offer. “There’s no need to go someplace else to find fish,” he says. “SML has large and small mouth bass, crappie, perch, catfish and oodles of striped bass [also known as ‘striper’]. You can fish it year round with good results, though I wouldn’t call it ‘easy’ fishing. There’s lots of standing timber still on the bottom, providing deep water cover. The stripers stay down and often feed at night. In winter though, with colder surface temperatures, they will chase shad [bait fish] to the surface. Birds swirling above the shad schools often give away exactly where the stripers are feeding,” he explains.

“When you’re using a freshwater rod and 10 to 15 pound test line, there’s lots of excitement when a striper hits,” Wilson continues. “They are strong fighters, often schooling 50 or 60 feet down, and bringing them up on light tackle is both challenging and fun.”

Wilson has been fishing these waters since before SML became a lake, initially with his dad on what was then the Roanoke River, then when the basin was flooded, as the newly created Smith Mountain Project combined with the adjoining Blackwater River to create Virginia’s second largest lake. At 20,600 acres, it’s about half the size of Kerr Lake, which spans into North Carolina.

Wilson fishes exclusively with artificial bait, favoring single hook lures that do minimal damage to the fish and thus dramatically increase survival rates. He advocates catch-andrelease, only netting the ones his charter clients plan to take home for eating. And while state citation fish (20 pounds and up for stripers) are always sought after, the best eating size, he says, are 8 to 10 pounds—about average size for SML.

Choose your favorite part of the lake Kenny Short runs a Sea Born FX25 sport fishing boat with a 300 horsepower Yamaha motor out of SML’s Gills Creek, and while that rig will get him to far distant parts of the lake in a hurry, he favors the middle and upper portions of the Blackwater River side, close to where he usually starts. “Customers generally prefer wetting lines to boat riding,” he asserts.

Short has been fishing Smith Mountain Lake since 1985 and began chartering in 2002. He, like Wilson, angled the tournament circuit for a while but has given that up in favor of weekends at home with his wife Tanya and 8-year-old Laci, who also loves to fish. 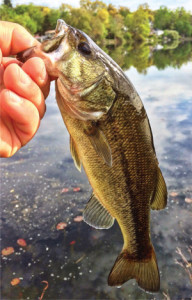 “Fish size has recovered nicely from the gill tissue parasite that swept through in 2003,” he points out. “Catching 15 to 19 pound fish is not uncommon, especially in spring and fall. Late summer and winter produce consistent numbers of 8 to 10 pounders. A ‘slot limit’ [a size range of fish that must be thrown back] protects 30 to 40-inch fish from November through May, making sure they get thrown back to grow through another summer,” Short says, adding, “That’s not a problem, since smaller fish make for better eating.” Short joins Wilson in advocating a “Let ’em go, let ’em grow!” philosophy. “We’re eager for SML to have a big-fish reputation,” he says.

Talking technique, Short says anglers seeking big fish often use planer boards, which pull lines wide to the side of a boat moving at trolling speed. Large gizzard shad bait fish, caught with casting nets, also attract large fish as a rule. Jigging [bait dropped straight down and jerked every few seconds to attract the bite] is good at times. Trolling with deep-running down lines can be effective— Short can manage 8 to 10 lines out at a time—but casting and reeling, which keeps everyone active and uses basic fishing skills, is quite popular with customers, he notes.

Guides will do half or full day trips, but a half day is usually plenty for catching Virginia’s two-fish-per-angler limit. Short, whose charter day begins at 3 a.m. with bait catching and preparing the boat, admits there are days when the fish refuse to cooperate. But should you get skunked, he’ll invite you back for a free make-up trip.

Guides will do half or full day trips, but a half day is usually plenty for catching Virginia’s two-fish-per-angler limit. Short, whose charter day begins at 3 a.m. with bait catching and preparing the boat, admits there are days when the fish refuse to cooperate. But should you get skunked, he’ll invite you back for a free make-up trip.

Learn from the experts

When it’s time to buy tackle, guides tend to recommend either Captain’s Quarters or Franklin Outdoors. “Tell us what you’re after and we can pretty much fix you up with the right tackle,” says Gary Nichols, weekday manager at Franklin Outdoors’ Westlake store. “Everyone who comes in has fish stories to tell, so we generally know who’s catching what, and where. Live bait and terminal tackle—hooks, swivels, leaders and sinkers—are our biggestdemand items.”

But there’s no substitute for dayin, day-out angling experience. Says Wilson, “You learn to catch fish on SML by fishing SML. And if you pay attention, you can learn more in a half day with an experienced guide than in a couple of years sporadically trying on your own. You’ll have a great time on the water, and you’ll very likely bring home fish for dinner!”