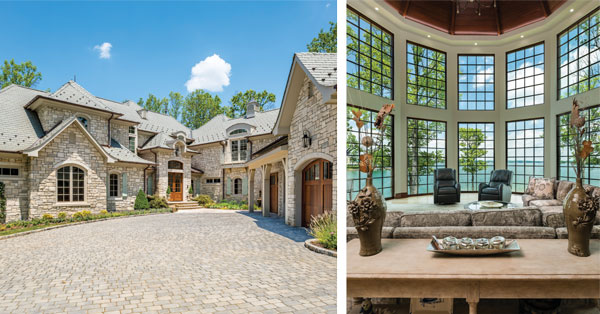 Tim and Jeri Lassiter have a property in Florida, but to recharge, they come to Smith Mountain Lake. The house they’ve built here, with painstaking attention to detail, is the “legacy home” they hope their family will enjoy for generations to come. The 12,000 square foot abode took two and a half years to build, and was a collaboration between the couple, architect Antonio Veloso (now retired), and builder Robert Bauer. The house is a showstopper, built with the finest materials by skilled craftsmen, whose exceptional work is evident in every room. 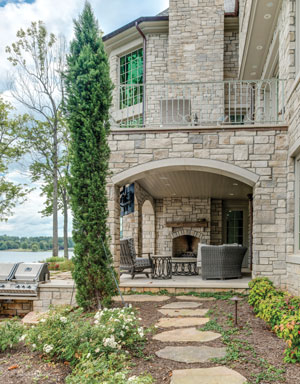 The grand property retains the casual feel that is synonymous with French Country style, set on arguably one of the best lots the lake has to offer. Situated in The Water’s Edge in Penhook, it was designed to take maximum advantage of the peninsula, with steal-your-breath-away water and mountain views from nearly every window

“It’s really the materials and the inside detail that makes this house so spectacular,” says Bauer. “It was a dream project and one of the best experiences I’ve had as a builder.” 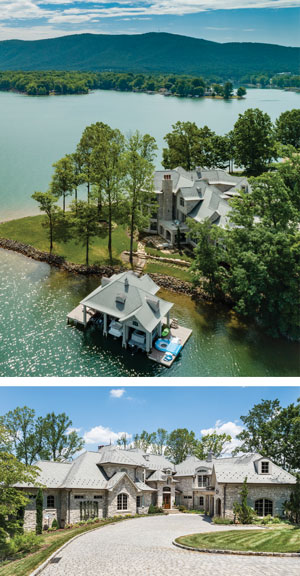 While Bauer, Veloso and the Lassiters worked seamlessly on the project, it wasn’t without its challenges. The outside is made almost entirely of limestone from Texas, and given the size of the house, more than 600 tons of stone was required. Shipping and unloading that much stone was a job, and the masonry work was time consuming. Luckily, Bauer has a network of craftsmen such as stone masons and subcontractors, many of whom he has relied on for nearly 20 years, who worked on the house. Their familiarity with one another and vast experience in the building sector, according to Bauer, is what allowed them to finish a home of this complexity in a relatively aggressive timeframe. 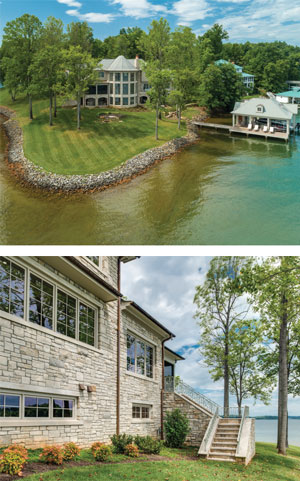 The bones of it were complicated to construct, with structural steel beyond the scope of most residential projects, Bauer recalls. It’s a smart home, and can be controlled from an iPad or phone. It has on-demand hot water and multiple heating and cooling zones. It has back-up generators, geothermal heating and cooling, and sensors to detect water leaks that can automatically shut off the water supply. That’s all to say, the construction was multi-faceted. As for the finishes, says Jeri of her husband Tim’s hands-on involvement with the project, “There was no detail left to chance.”

The 12,000 square foot French country home is situated on a peninsula at The Water’s Edge in Penhook, and features breathtaking water and mountain views. 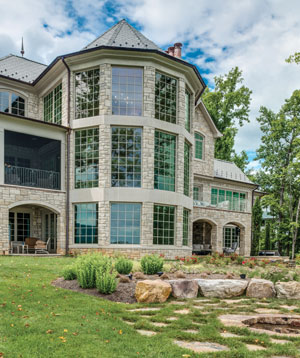 The exterior of the house has a multi-level roof line and is L-shaped, sitting at the peninsula’s tip. A stone driveway leads to a three car garage, across from which is the main entrance— solid wood French doors with large glass panes. The doors are positioned so that you can see through the back windows and get a glimpse of the lake from the entry. “This was our second custom build, and that’s something I learned… you think about what the sight lines will be,” says Tim. 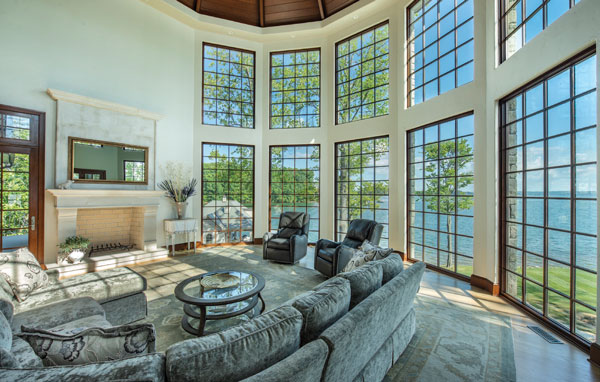 The Lassiters’ main living area is a five-sided space with vaulted ceilings and floor-to-ceiling windows. 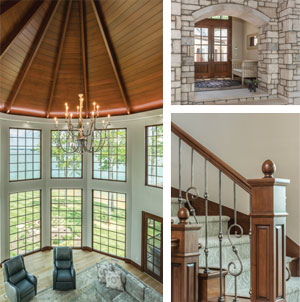 Stepping inside, the foyer is bracketed by a limestone archway and columns, the same material used on the exterior. Two stone steps lead down into a wide open living area. The expansive space features vaulted ceilings, sweeping views of the lake, and at the end closest to the lakefront, a five-sided room boasts floor-to-ceiling windows on each wall. Kris Willard, of Smith Mountain Lake-based Interiors by Kris, provided invaluable decorating and interior space planning assistance to the Lassiters during the design process.

A large circular sectional sofa faces the windows so family and friends can admire the view. Two comfortable swivel rocking chairs face the sectional to round out the seating group. Behind the sofa are four wingback chairs positioned in a circle, the perfect spot to gather for a cocktail. A buff colored limestone fireplace is on the wall to the left of the windows, with a TV above the mantel. Jeri and Tim couldn’t decide whether or not to put a TV in this room, given other recreational spaces in the house, so they compromised with a TV that looks like a mirror when not in use. 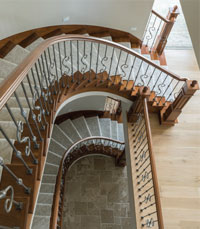 To the left of the main living area is a curved staircase with custom iron railing which was made off site and transported to Penhook. It hugs the wall of the house leading to the upstairs bedrooms and the downstairs recreational spaces. An elevator in the house also shuttles guests and luggage and makes the house usable for older relatives, such as Tim’s 97-yearold mother. 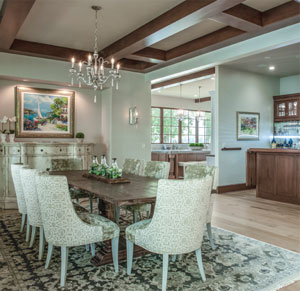 To the right of the living area is a formal dining space with seating for eight or more. Across from the seating area, a custom built cherry bar, with a sink, ice maker, and shelving for spirits, is stocked for parties and weekends with friends. While the view is the focal point, the eye also travels to the beautiful woodwork and mouldings, which were hand stained on site. “The builder’s sons stained everything, and it was a multi-step process to get it just right,” says Tim.

Bauer says his grown sons, David and Lucas, were there daily to manage the project and attend to details such as this. While the mouldings and trim are stained, the walls are a creamy plaster with a light distress, consistent with French Country style. 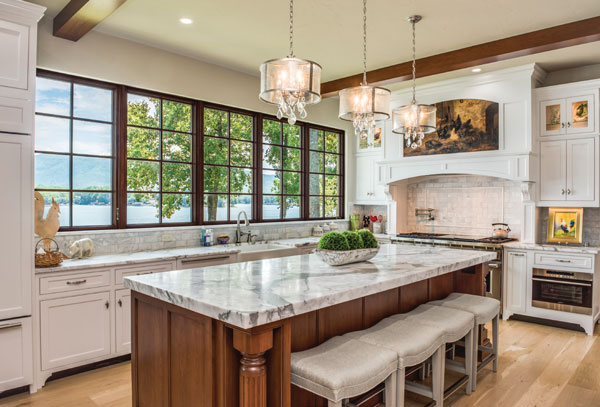 A kitchen with custom cabinetry and a bank of windows leads to a morning room and screened porch.

Down the hallway past the bar is the kitchen. Separate from the open living area, it has a cozy, country feel and features fully custom cabinetry by Daniel A Peters Woodworking, of Roanoke. The white wood perimeter cabinets are topped with marble, and a bank of windows near the sink, with an unobstructed lake and mountain view, would make even the most reluctant dishwasher volunteer for the task. A four-seater cherry island is stained wood, and topped with a two-inch-thick slab of marble. The kitchen is outfitted in top-of-the-line appliances, like a Wolf double oven, Wolf steam oven, Sub Zero refrigerator, warming drawer, built-in coffee maker and small wine chiller. Over the range, a painting of chickens lends whimsy and warmth to the space. 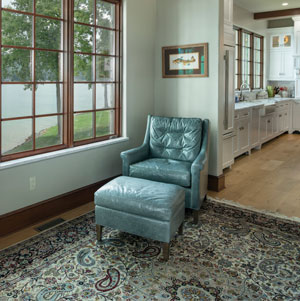 Off the kitchen, a butler’s pantry with a sliding door contains countertop appliances like the toaster and blender, which allows the main kitchen to stay clutter-free. A second dishwasher and second refrigerator make it easy for the Lassiters to entertain a crowd. A morning room is also off the kitchen, and is Jeri’s favorite spot. “This was one of my requests for the house,” Jeri remarks. One can see why—it’s a quaint and quiet place to sip coffee and read the paper, or just take in the view. The morning room leads to the screened porch, a fine spot in nice weather.

The master suite is on the home’s main level. It has a vaulted ceiling with stained beams, and a bank of windows facing the lake. The adjoining bath has his-and-hers vanities, also custom made by Daniel A Peters Woodworking. A freestanding soaking tub has its own alcove, and a his-and-hers shower has controls that were placed for both Tim and Jeri’s heights.

The main floor, which also contains a drop zone, laundry, study, full bath and powder room, is covered in French sawn wide plank white oak. Also known as “live sawn,” it is a technique that results in more knots and a rustic look, which the Lassiters wanted. 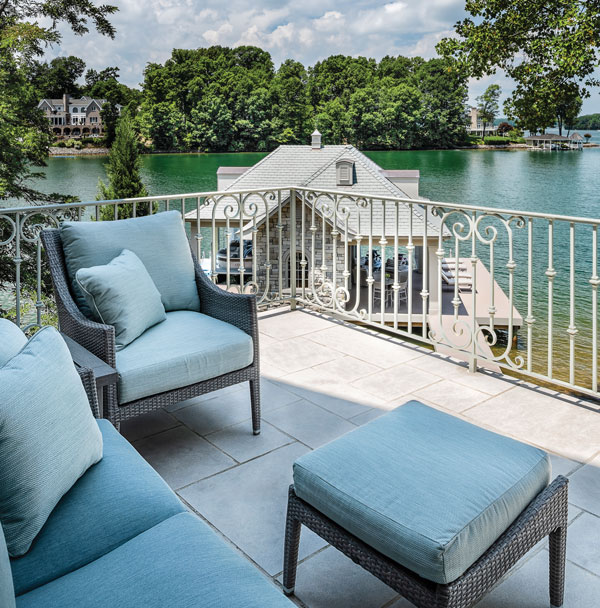 The stylish dock has room for plenty of personal watercraft, plus creature comforts like a bar, ceiling fan, and TV.

Up the winding staircase to the second story are three bedrooms and four bathrooms, an upstairs laundry, and a landing with seating that overlooks the lake and the space below. A casual bunk room, built for the grandkids, sleeps six when a crowd is in town. Each bedroom has its own thermostat to control temperature, and the second laundry room is handy for doing washing and linens on this level, without having to carry laundry up and down the stairs. 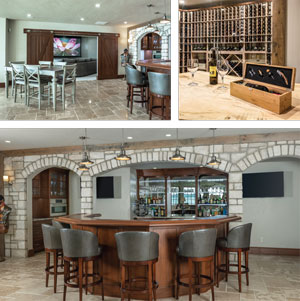 Descending the stairs to the finished basement, it’s obvious that this space was designed for fun. The pinnacle is a large, pentagon-shaped bar that extends out in the room, framed by limestone arches and antique beams. The bar is flanked by two large TVs for viewing multiple games. A sink, ice maker and LED-lit shelves are full of glassware and spirits to create any concoction one would desire. To the left of and behind the bar is a small kitchen area for snack prep. The floor is a Travertine marble that Tim found in Tampa—both attractive and practical for wet feet just in from the dock.

Concealed behind a sliding barn door is the movie room, with a sink-in sectional sofa, carpeted floor and surround sound, where the Lassiters like to take in a movie and snuggle up with their three grandchildren. The basement also has a game table in the main area, and a patio with a hot tub. A workout room to get in a sweat session is also on this level, as well as a steam room or dry sauna to relax in afterwards. The are also dressing rooms for heading out to the lake or showering off upon return.

Tim, a cigar aficionado and a humidor collector, had a cigar room built in the basement with a special ventilation system to filter out odors and smoke. It has plush chairs to relax in while enjoying cigars and hanging out with friends or his sons. 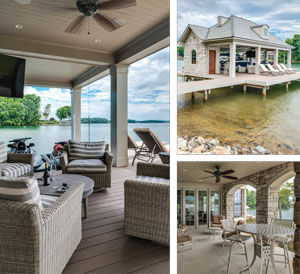 The basement leads to the outdoor area, which features a sunken fire pit and built-in grill. The private dock at the water’s edge was built by Turner’s Building Inc., and though the size of the dock was limited by shoreline regulations, they packed as much fun as they could into the structure. It has a flat screen TV, seating, a bar, two jet skis, two boats, a kayak, and two stand-up paddleboards.

It’s a dock and a house thoughtfully built for family to enjoy for years to come. When the Virginia summer calls, the Lassiters are there, ready to make lake memories with the ones they love most. ✦ 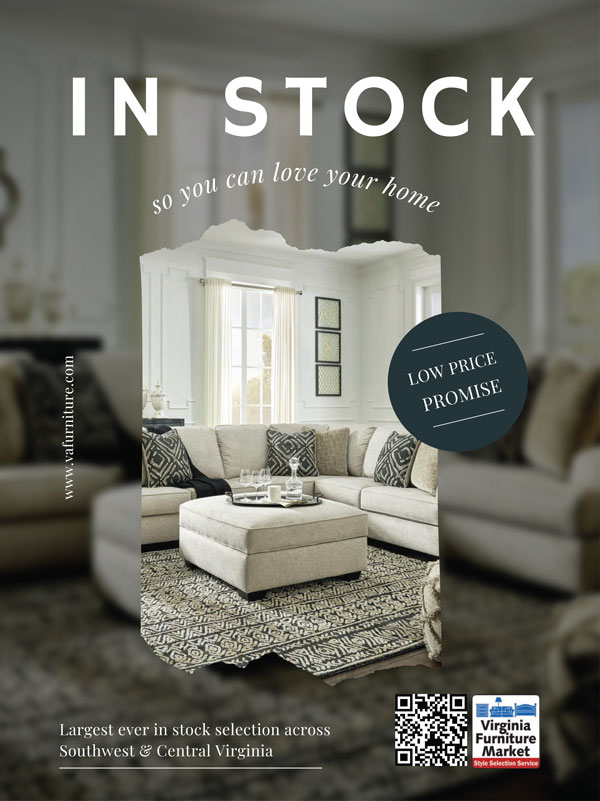