What sold Mark and Lisa Cruise on their property near Marker R47 was the view—a lush and inviting vista that stretches eastward across the main channel of Smith Mountain Lake, perfect for sunrises and weekend serenity.

SML is a place where the couple, who have been married for 36 years, never imagined they would one day have a home. The Cruises spent a weekend in the early 1980s at Crazy Horse Campground, during an era when fishing cabins, getaway cottages, and mostly untouched lands still dominated the shoreline. Stores were few and far between. It took two decades for the Richmond couple, who were exploring possibilities for a second home to enjoy on weekends, to rekindle their connection to SML. When they did, they saw a region that little resembled what they encountered the first time.

The property was one of the first places the cruises visited. “At the time, the house itself didn’t have a lot of features, but we couldn’t get past how beautiful the view was,” says lisa. 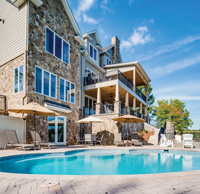 It was a long path to their ideal destination. Lisa loves beaches, so they began by looking at the Outer Banks. A home on the Chesapeake Bay or Lake Gaston was also considered. “We wanted something that we would actually use and that would be an easy getaway on the weekends. We were getting frustrated because we hadn’t really found what we wanted,” Mark says. “Then one day, I suggested, ‘Why don’t we go up to Smith Mountain Lake.’”

This was 2006, and the Cruises were impressed by what the 21st century had ushered into the region. “Once we started looking up here,” Mark says, “I think it was obvious pretty quickly that we had made the right decision.”

Working with real estate agent Di Jarrard, the couple began to navigate the winding roads and various nooks and crannies that define the shores of SML. They walked through 63 homes, and drove past many more. Mark is an engineer and took a methodical approach to the home buying process. Building and property features were cataloged into a spreadsheet and ranked. The Cruises looked for specific characteristics that would draw them in: the option to have a pool, deep water for the boat house, at least four bedrooms and a view that faced west so that they could see the sunsets across the water.

The living space, with its grand chimney and see-through firebox, is the gateway to the main deck overlooking the lake.

Their current spot in Hardy was one of the first properties that they looked at. “At the time, the house itself didn’t have a lot of features, but we couldn’t get past how beautiful the view was,” Lisa says, even though it looks east over the water instead of west.

The original home that stood here was about 2,900 square feet, though much of that was unfinished or needed to be refurbished. It had been vacant for at least two years, and the dock was falling in. Yet it felt right. It positioned the Cruises relatively close to family members, and the neighbors and community were welcoming and genuine.

They saw that there was potential to renovate the home to better fit their needs, but after living here a while, they took it a step further: The original house was completely razed, and foundations were removed. The Cruises decided to start from scratch to create their dream home. “We’d been here a couple of years and thought, ‘This is the most relaxing place on Earth. We could definitely retire here,’” Mark says.

The Cruises enlisted VC Design & Build to start the project from the ground up. Work began in 2015, with Tom Sterne at the project’s helm. Despite being a few hours away in Richmond, the couple were able to work seamlessly with the builder. A project like this was new to the Cruises, but Sterne skillfully tackled issues that arose and anticipated any pitfalls—though Mother Nature threw a particularly rainy season upon them, which caused some difficulties along the way, especially as foundation work was being done. “At first, we would only come up once a month during the construction phase, on a Saturday, just to see how things looked,” Lisa says. “As it progressed and got toward the end, we came up a lot more.”

The rains delayed the overall project, which took nearly 18 months to complete. Sometimes, with loan deadlines to meet, the Cruises found themselves up against the wall. But the builders and the landscaping company, CLC Inc., stepped up. Mark says that CLC powered through weekends and evenings with the lights on to finish the job so that the bank could see results. “Chris and Trevor Templeton [of CLC] did a really good job with the function of the landscaping,” Mark says. “And it was a tough situation, particularly with all the rain that we had.”

The Cruises wanted both the home and property design to be spacious enough so that there wouldn’t be any bottlenecks for things like pool or shower access. They didn’t want to worry about air mattresses or roll-away beds, or concerns that there wouldn’t be enough hot water for showering and laundry. “We wanted a home where everyone would be comfortable and have enough space, where nobody would worry about where to sleep or play,” Mark said. 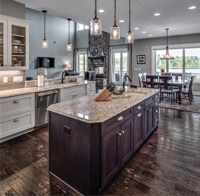 Today, Lisa and Mark have a fourstory, 7,600-square-foot home, with six bedrooms, six and a half bathrooms, two separate garages, and a pool that allows them an unobstructed view of the lake. They were also able to buy the lot next door, allowing them to add a beautifully paved driveway that is gentler than initially envisioned. Mark himself built the imposing wooden guard railing along the drive, which conjures images more akin to the Blue Ridge Parkway than of Smith Mountain Lake homes. The driveway arrives at garages with dark wood doors which give the building flair beyond the norm.

The openconcept kitchen features ample workspace, water views, and hand-scraped hardwood flooring, which covers much of the main level.

Similarly, a stunningly tall wooden front door welcomes guests into a living room with 32-foot ceilings and exposed beams. A grand chimney with a seethrough firebox adorns the lake side of the room. Wide, dark-colored engineered hardwood floors that have been hand scraped cover much of the main level. “I wanted this to be a house that we could live in, not a show place,” says Lisa, whose design interests bring together Craftsman styles and antique looks.

This living space is also the gateway to the main deck overlooking SML. The serenity of the outdoor seating area, with the opportunity to be close to the fire in the cooler months or to have an overhead fan going during the warmer ones, is apparent. “You go over there at the end of the day, when the sun’s not in your face, with a glass of wine and look out at that lake,” Lisa says. “That’s my spot.”

Inside the house next to the living room is the spacious kitchen, created (as with everything else) with comfort in mind. There’s ample counter space for multiple people to work. The glass backsplash adds depth and shine to the space, and the pantry is sizable enough to support large gatherings. On one side of the room is a dumbwaiter that operates between the kitchen and the bar downstairs. “When we first had the dumbwaiter built, we actually asked ourselves, ‘Will we use this, will we not use it?’” Mark says. “We use it all the time.”

The main level also features the window-laden master bedroom with open views of the lake, a master bath with ornate countertops and a large tiled shower, a laundry room outfitted with a wall-mounted television and pocket door to maximize useable space, and two guest bedrooms with their own attached bathrooms.

Many of the electrical features are accessible at the touch of a button. “One thing that was important for me is the automation in the house,” Mark says. “Almost everything in here, from the heating and air to the fans, is all connected to the Wi-Fi, which is tied into my phone. The sound system is on my phone, as is the backup generator and the security system.”

Throughout the main level there are details that will draw you in, from the various metal tables and artwork, to the tile patterns in the bathrooms, to the rock around the fireplace. “Every single room seems to have something in it that I look at and say, ‘That’s my favorite thing,’” Mark says.

An especially interesting feature is that the home is predisposed for an elevator. Expecting this to be their home during retirement, each floor has what now appears to be super-sized closets but are, in fact, the infrastructure for an elevator to be installed when the time comes.

Room to roam is ample upstairs, where a guest room nestled away from everything is perfect for visits from the Cruises’ son and daughter-in-law and their baby. Another bedroom on that floor is an ode to Lisa’s love of nostalgia, with antique furnishings as well as photography on the walls.

Down from the main level is the game room, where a pool table, dart board, bar and living space help to bring friends and family together. On the walls are deer mounts from three generations of hunters: the first from Lisa’s dad, the second from Mark, and the last from the Cruises’ son. Mark is an avid hunter and fisherman, and these themes appear throughout much of the home.

Off the rec area is the fitness room, which features large sliding doors made from reclaimed barn wood. The room has wall-to-wall rubber flooring, giving the space for weights and treadmills an authentic gym-like quality. The sound system is piped through the room, and there’s a television and several windows. “It’s a whole lot easier to exercise staring at the water,” Mark notes.

The wine cellar features an intricate metal gate discovered in a salvage yard. The piece was originally from a pre-Civil War home in downtown Richmond. and 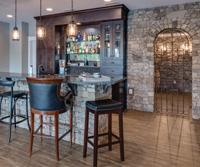 Off of the bar is the Cruises’ wine cellar, which is entered through an intricate—and appropriately squeaky— metal gate, which was found in a salvage yard and came from a pre-Civil War home in downtown Richmond. The stonework on the cellar walls has a Tuscan ambience, and the cooler itself is equipped to hold 960 bottles.

A stairway leads down to the subbasement, which, during construction, could have either been filled in or turned into usable space. The Cruises opted not to fill it in and ultimately created the perfect area—complete with ping pong table, refrigerator, and full bathroom—to enter and exit the pool. From the pool, which was built by National Pools of Roanoke, there are unobstructed views of the lake thanks to the use of an extra retaining wall, which eliminated requirements for a railing. Standing in the pool, a shoreline willow tree comes into focus, as does the three-slip boathouse and upper-level sunning deck, which dwarfs what the original owners put in decades ago. 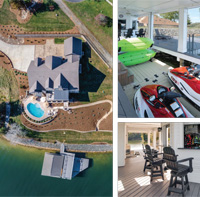 From top to bottom, the Cruises’ home was designed to melt stress. Traffic and chaos are common in Richmond and Chesterfield County, but the lake makes them feel comfortable. They trust the people and embrace the surroundings, and look forward to some day retiring in their dream surroundings. “We’ve spent 30 years in Richmond,” Mark says, “but this, the lake, feels like home.” 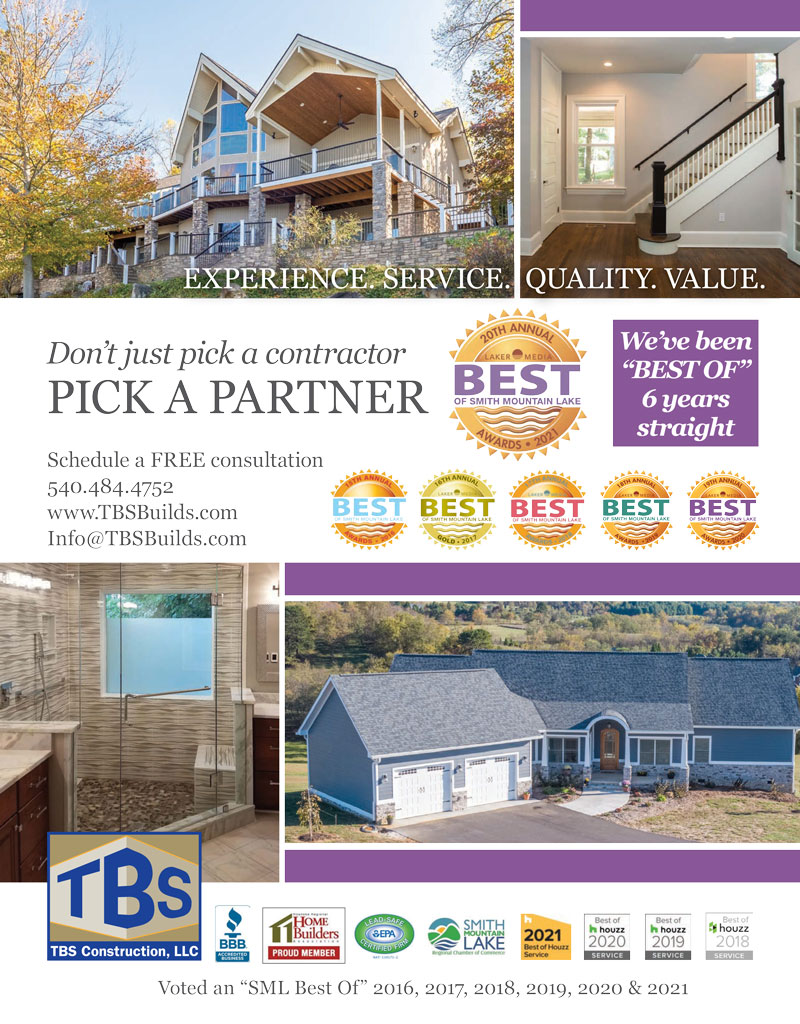