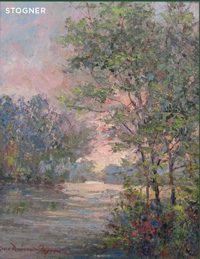 The stunning vistas and seasonal changes of Smith Mountain Lake are a natural draw to both local and visiting artists. Likewise, local paintings are popular with residents and visitors—all of whom seek to capture a favorite scene, a moment in time, a special memory. Water, in particular, has always held a particular fascination for artists. The changeable colors, the light and the weather—all provide endless opportunities to experiment and to create that scene which draws in the viewer. 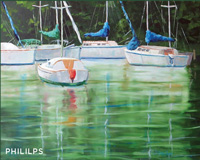 The Little Gallery at Smith Mountain Lake has a large selection of the region’s most beloved artists, including 65 to 70 painters from Virginia and North Carolina, according to gallery owner Pam Bryant. Each piece is hand painted and one of a kind, offering collectors an exclusive opportunity to acquire something unique. “Every artist has their own style and personality, and each painting evokes some type of emotion,” says Bryant. “We love supporting local artists because it contributes to the creative nature residing in our community, and enables us to support their businesses as well as other local businesses like printers and framers,” she says. 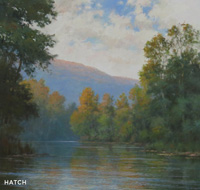 If art is about a sense of place, what better than to capture the local vistas of our region? Whether you live here or are visiting, having a local lakescape or landscape evokes the joy and serenity of this beautiful place. Here are several artists painting the surrounding vistas… 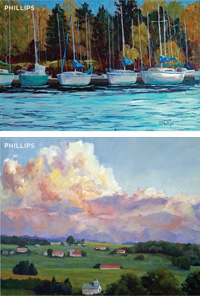 Dana Phillips
Dana Phillips is a Texas native who spent several decades in California before becoming a resident of Smith Mountain Lake. Initially a recreational painter, Phillips took workshops with various Bay Area artists, and has been involved in shows and competitions in both California and North Carolina. Many of his landscapes feature sailboats and life on the water. The farmland and rolling hills surrounding the lake, with their classic, rural vignettes, are also favorite subjects. “I moved to the lake from California, and my painting style is best described as California impressionist,” Phillips says. “The lake and the water are compelling subjects, and every day I see new and enchanting nuances of light and color and atmosphere. My ongoing challenge is to adapt my style to my visual discoveries.”

David Heath
David Heath is a son of Virginia who began his career in commercial art. In the early 1970s, he began studying painting, focusing on 19th century American landscape painters, infusing traditional technique with his own modern style and aesthetic. He enjoys experimenting with plein air techniques to create scenes that elicit an emotional response in the viewer, and gravitates to what he calls “the solitary landscape”—a scene untouched by man and contemporary life. His landscapes are atmospheric; they offer an impression of a place rather than a literal interpretation. His work often captures fleeting moments of dusk and dawn—early morning mist on the lake, autumn across the mountains, the verdant banks of local creeks and rivers—while evoking a timeless serenity. Heath, who now lives in nearby Bedford, has often painted Smith Mountain Lake because, he says, “I lived here for close to 20 years, and I’m always drawn to it. I love the mountains next to the lake, the variety of scenery—it’s very peaceful.”

Jane Duncan Stogner
Franklin County artist Jane Duncan Stogner has been painting regional vistas for several decades. A lifelong art lover, Stogner has a degree in art, is a professor emeritus at Ferrum College, and founded Bald Knob Artists, a group of 50 to 80 Southwest Virginia artists. Her works are notable for her use of both brush and palette knife to create paintings full of vibrancy and seasonal detail, and her paintings often feature recognizable landmarks. Stogner says she always has a camera on her hip, and enjoys taking photos of potential lakescapes while out on a boat because it offers an angle from the water you don’t see on land. “I have been inspired by the natural beauty of the lake for many years,” she says. “The sunrises and sunsets are often spectacular from the wide-open water point of view. I try to capture the moment in time in my oil paintings.” Stogner also says she enjoys painting on a large scale, and at her studio she is currently working on several 36 by 48-inch pieces. Her works have been featured in private collections from coast to coast, and she was one of the first artists at Little Gallery. 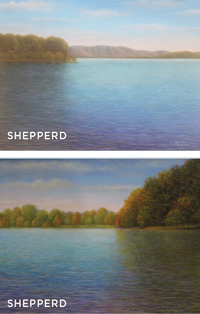 Robert Shepperd
Robert Shepperd lives a little outside of Smith Mountain Lake in Evington, Virginia. He moved to Central Virginia as a child, and in the 1980s learned to paint during a class taught by the late artist Buck Tyree. Shepperd works in acrylics, and his landscapes are notable for their level of detail. Many feature verdant scenes of trees and rippling water—not only of Smith Mountain Lake, but also local vistas of mountains and bucolic farmlands. “I enjoy the beauty of Central Virginia and have lived here for 50 years,” says Shepperd. “I don’t have a lot of formal training; I’ve built my own style and developed my own technique over the years.” He has painted the Peaks of Otter over one hundred times, and Smith Mountain Lake more than 150 times. “When I started painting Smith Mountain Lake in the 1980s, I did it for commercial reasons, when there weren’t many artist painting it,” he explains. But now? “I’ve just always enjoyed the water. I go to the state park, I like to swim,” he says. 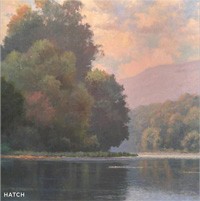 Ed Hatch
Ed Hatch is an artist grounded in his rural Virginia roots. He lives in his childhood home, and his studio was once his great-grandparents’ general store, which they opened in 1915. In his work he explores not only local vistas and landscapes, but ranges farther afield to capture scenes across Virginia, and beyond. Hatch says that he seeks to find the “extraordinary beauty in everyday moments,” to capture an ephemeral moment that draws the viewer into the world of the scene. “I strive for visual poetry in my landscape paintings,” Hatch says. “I want people to participate in my paintings—to be caught up in the scenes as much as I was when I stopped to paint them—to feel the depth, the fleeting light and the mist, to wonder what is around the bend.”

Carrie McNutt
Carrie McNutt’s oil and watercolor landscapes often feature a sense of movement—in the arch of trees, the gentle blur of stone and water, or the sweep of clouds. The Roanoke-based artist is a Kansas transplant who studied interior design at university, and this training infuses her often vibrant compositions. Several of her works hang at the historic Peaks of Otter Lodge on the Blue Ridge Parkway, as well as at Roanoke-area venues. 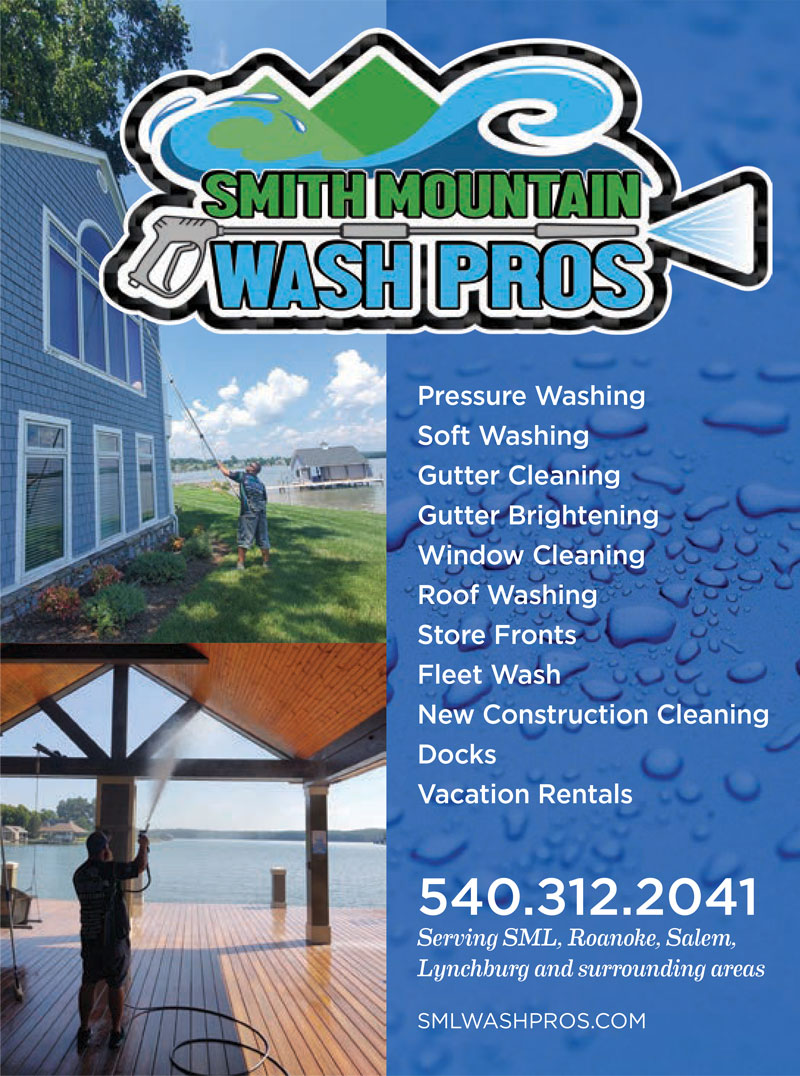