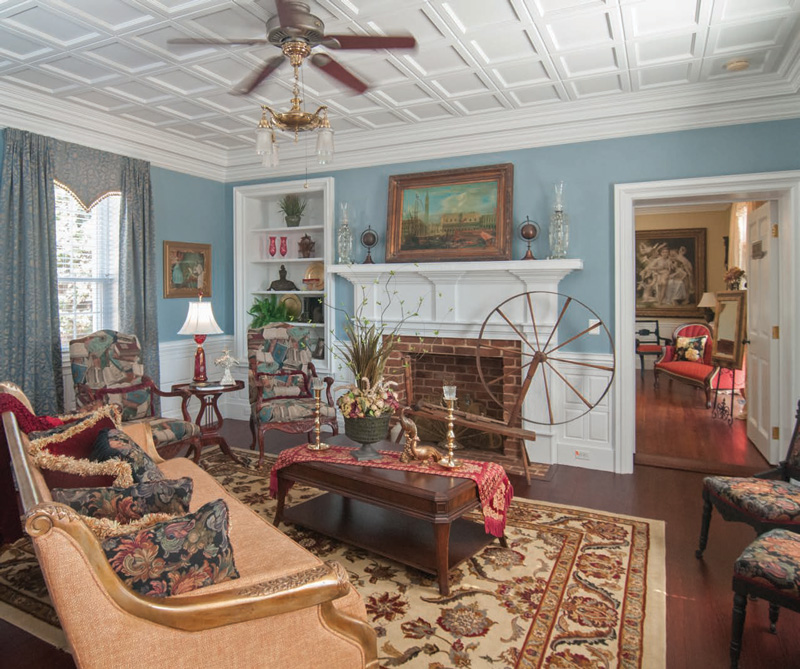 For over twenty-five years, Susan Mitchell Ober dreamed of owning a historic home, preserving it, and operating it as a bed and breakfast in her native Franklin County. An independent business woman and busy wife and mother, that dream felt unattainable for decades until one day she spotted a woman at the end of a beautiful Bradford pear-lined driveway at one of her favorite antebellum homes in the area. The home, Susan had noted over time, seemed to have been under renovation for many years, and she was curious. “I used to drive by the property,” Susan explains, “and one day I spotted someone in the driveway and I stopped to chat.”

The woman turned out to be Darlene Leslie, who, along with her husband Mike, had indeed been lovingly renovating the historic home themselves, a painstaking process that had taken them sixteen years. The couple had come up from South Carolina in 1999 looking for property to build a new house on for their retirement years, but when they saw the shell of what looked like an old English manor home half-choked with vines, they decided to try and renovate it and operate a bed and breakfast. Though the couple had renovated several homes in the past, the scope of this one turned out to be too much for them. After sixteen years and with renovations nearly complete, they were tired and ready to turn over the reins to someone with the energy and drive to take over and run the place as the bed and breakfast and event venue they’d envisioned. Fortunately for them that spring day, the perfect person showed up in their driveway. Susan assumed ownership in 2016, and Katherine Grace Manor (named for her daughter Katherine, and granddaughter Grace) was born.

History literally marched through the property, explains Susan. The house, originally built in 1771, was part of a pre-Revolutionary War royal land grant and was built in approximation of an English manor, common to colonial builders of the time: three stories, with rounded brick and dentil molding, and walls stacked six bricks thick and bolstered with metal cables and hand-hewn beams. The home was certainly built to last.

According to the Franklin County Historical Society, the first owner was a Jonathan Richeson (or “Richardson” depending on the document). Richeson bought 200 acres in 1768, built the house for his family and established a plantation. During the Revolutionary War, British soldiers marched right through the lower meadow visible from the house. In 1780, Richeson added another 100 acres along Gills Creek, which still runs through the property today. According to historical records, Richeson was a slave owner and the plantation, which produced tobacco, lumber, and ran a gristmill, required the labor of over 300 enslaved individuals at the height of its production. Jonathan Richeson was also both the sheriff and justice of the peace of Bedford, as this area was once part of Bedford County before Franklin County was formed in 1785. In traditional English style, the house was built with the kitchen in the basement, and as one passes through the wood-beamed room that was once the old kitchen, Susan points to a small “closet,” (currently used to house HVAC equipment) that was, at the home’s inception, a jail. “If you were a prisoner and also a resident of his jurisdiction,” Susan points out, “you could be tried right there in Richeson’s home, since he was also the Justice of the Peace.”

Throughout the 1800s the home stayed in the family, passing first to Richeson’s wife, Elizabeth Taylor Richeson, then his sons and brother-in-law, Skelton Taylor, who was the founder of Taylor’s Store, a Franklin County landmark. Though the plantation house survived the ravages of the Civil War, the property began a steady decline in the years following, and by the end of the century, as the small, picturesque graveyard adjacent to the driveway still attests, the family slowly died out. Susan walks through the family gravesite and points out the headstones. “This is a piece of history right here,” she says, indicating the graves of two Civil War soldiers, marked with flags, and the headstones of numerous Richeson descendants. “This property has seen so much.”

The 20th century was not kind to the house. After the original family died out, the property was purchased by investors, but allowed to sit vacant. Without regular care and upkeep, rodents moved into the attic, vines grew up the walls, parts of the roof caved in, and all the windows were broken. By 1999, when the manor was spotted by Mike and Darlene Leslie, the place looked like it was ready for the wrecking ball. 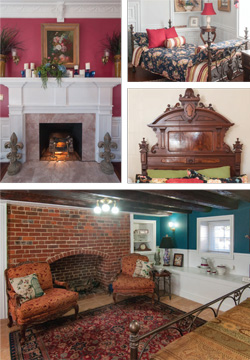 The property, just a few miles from Smith Mountain Lake, sits at the crest of a gentle rise. Katherine Grace Manor now encompasses only ten acres, but Susan has preserved its beautiful meadow and frontage on Gills Creek, so that it still feels private and secluded. The terraced lawn where, according to Susan’s research, slave quarters once stood, today features patios and garden beds, including a stunning butterfly garden, a nearby zen garden, and an unusual tree that Susan calls the “holy tree,” a hawthorn variety that has special significance. “Legend has it that the thorns from this type of tree made up the crown Jesus wore on the cross,” Susan explains. “There was a specimen in Glastonbury, England that flowered twice a year—right before Christmas and right before Easter—hence the name.” She believes that the tree was originally imported to the property from England, and it has a few “descendants” of its own scattered around the property.

Guests can enjoy the bucolic views of the holy tree and the meadow beyond from the comfortable patio seating, or can stroll down the meadow to enjoy the weeping willow-edged creek, where Susan has installed a forty-foot fire pit area for her guests’ enjoyment.

Susan credits her predecessors entirely with the challenging work of resurrecting Katherine Grace Manor. “There are a lot of older homes in this county,” she explains, “but I don’t know of any that have been restored to the shape that this house has been.” She also credits the Leslies with a high quality renovation that included a new roof, new interior walls, refinished floors, new plumbing, electrical wiring, and HVAC. They even reproduced and replaced the plaster walls, and the extensive wainscoting seen throughout the home.

“These moldings have seventeen layers of crown,” Susan says, pointing toward the detailed original ceiling of the parlor. In the dining room, they had to reconstruct the intricate moldings from what they could salvage lying about the manor. From a vine-covered shell of a house to the structure that visitors can see today, it was what she calls “a labor of love” by Mike and Darlene Leslie. “I furnished it, decorated it, and maintain it,” Susan explains, modestly, “but the renovation was all the Leslies.” Susan owns Southern Lamp and Shade in Rocky Mount, and was able to draw on her decorating experience to furnish and decorate Katherine Grace Manor, but she credits Laurie Hartwell, of Hartwell Design in Roanoke, for help as well.

The original home had a classic “two over two” floor plan: Downstairs, a dining room and parlor flank the main entry hall, and the original stairway ascends to a landing that opens onto two large bedroom suites. Since the glass throughout the home was gone after years of neglect, modern replacement windows have been fitted, but the Leslies’ daughter Tanya Leslie, a local artist from Boones Mill, lovingly crafted unique stained and etched glass accents for the windows of each room, including the double doors at either end of the central hallway.

From the exterior, the most noticeable changes are the two wings on either side of the main structure. These wings, added in 2010, enabled the Leslies, and now Susan, to incorporate modern necessities such as a large modern kitchen on the ground floor, and amenities for three guest suites. Large bathrooms, complete with walkin showers and claw foot tubs, and large closets are part of the two upstairs and one ground floor suites. The two-story wings also provide each of Katherine Grace’s three suites with generous private balconies.

Descending the staircase from the kitchen to the basement level, Susan explains that one of the differences between English and American homes of this era is that the basements of English homes were generally only partially underground. This enabled windows of adequate size for ventilation, which was important since, in colonial times, the cooking was done in a kitchen underneath the dining room. Today, the second staircase from the new kitchen ends in what Susan calls the “common room,” furnished casually with comfortable seating, a game table, and the manor’s only TV.

Next to the common room is the home’s original kitchen. Though it has been converted to a cozy guest room, visitors can see the preserved colonialera hearth and the heavy exposed beams that frame the structure. Susan rolls back the rug to reveal a hatch leading to the kitchen’s old root cellar, still intact beneath the floor. The remainder of the basement level comprises a large, well-appointed guest bathroom, a small apartment that Susan occupies and, of course, the “famous HVAC closet”—the site of Jonathan Richeson’s jail. According to Susan, the jail could accommodate up to six prisoners in wall shackles, but today’s visitors are undoubtedly grateful for the modern heat and air conditioning unit now housed in the space.

Susan opened Katherine Grace Manor in October of 2016, and since then has hosted more than 3,300 guests from as far away as Japan and from as close as just down the street. She’s hosted weddings, parties, teas, business meetings, and luncheons in addition to running the bed and breakfast. Susan sees the place as a blessing she is privileged to share, and opening her historic home to the public is part of her mission. Often it is the neighbors, Susan explains, who are the most curious. “Many of the neighbors have said, ‘We always wanted to see the place,’ so I’ve been inviting them to come, especially since they kind of watched it being restored. I give tours, let them go through and see it, and they are amazed that there’s something like this here in Franklin County, that they can see and come back to and have a lunch, bring their family.”

She says that the hardest thing about her first year in business is the fear of doing it alone. Thankfully she has help from family, especially husband Kenny and daughter Katherine, but also the support of close friends who have stood by her from the beginning. Her aim is to make the people of her native Franklin County proud of their history.

Preserving and running Katherine Grace Manor is a labor of love for Susan Mitchell Ober, but it is also her way to give back to her community. “When people stop in and say, ‘You have a beautiful home,’ I say, ‘It’s not my home. This place is history. It’s here for everyone to enjoy.’” On Katherine Grace Manor’s website, Susan describes herself as “a southern girl trying to make a dream come true,” and, through both good luck and back-breaking work, she is doing just that. 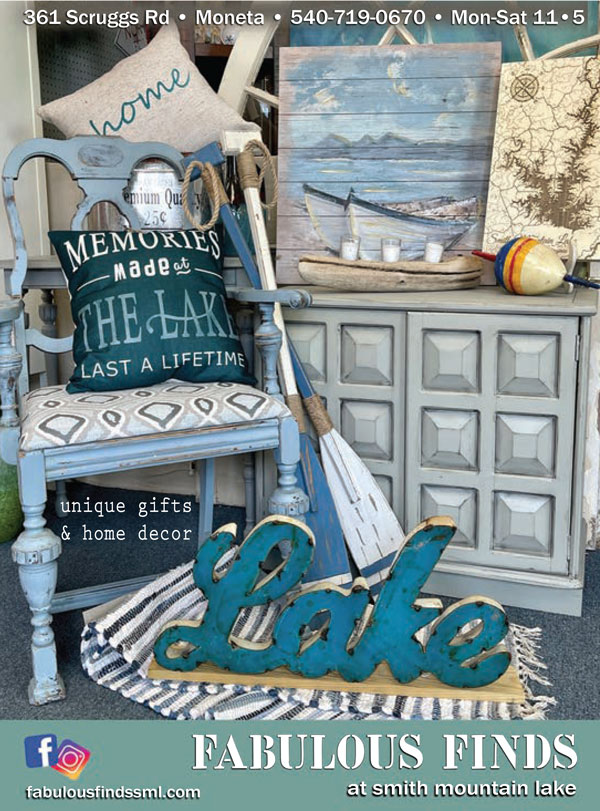