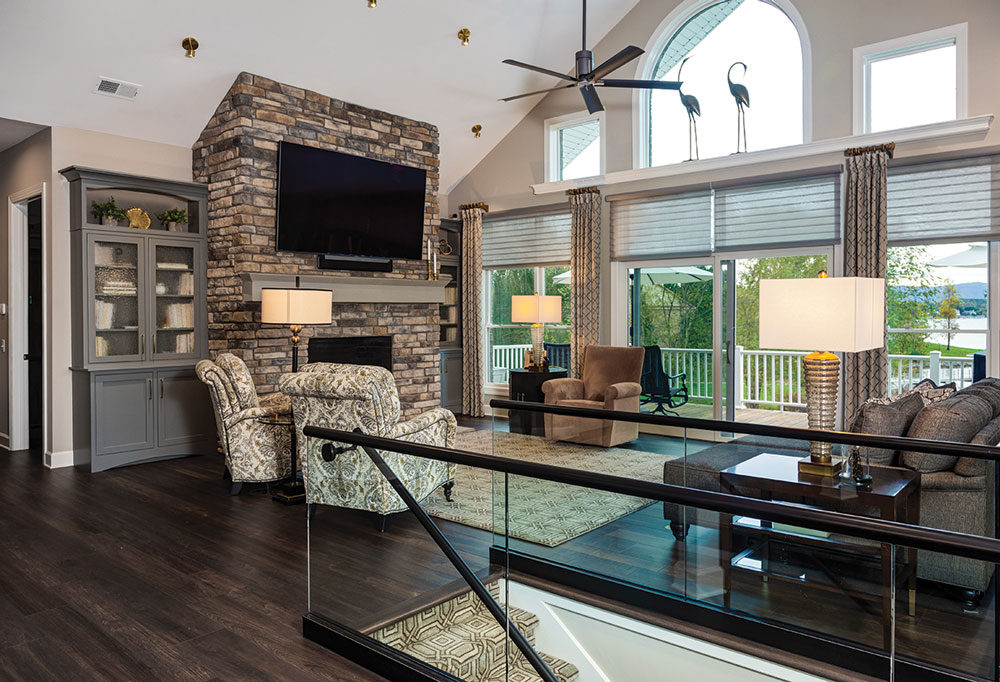 It’s a wonderful feeling to finally see the house that’s been built up around you become more than just inhabitable, when it becomes truly livable. For the better part of a year, Karen and John Weinhardt lived out of a guest bedroom and an office in their newly purchased home while it was otherwise stripped down to the studs, walls were removed and honey-colored floors, cabinetry and other accents were changed to better reflect the Weinhardts’ tastes.

Ed Vaughn, owner of WEV Construction, and his team were instrumental in transforming the Weinhardts’ house in the Montego Bay neighborhood of Franklin County into a comfortable and welcoming residence for their large family.

“I loved the yard, loved the flat land. The house, though, needed lots of changes. I knew that from the start,” Karen says of the 5,200-square-foot home built in 2004. “But I also knew what we could do with it.” 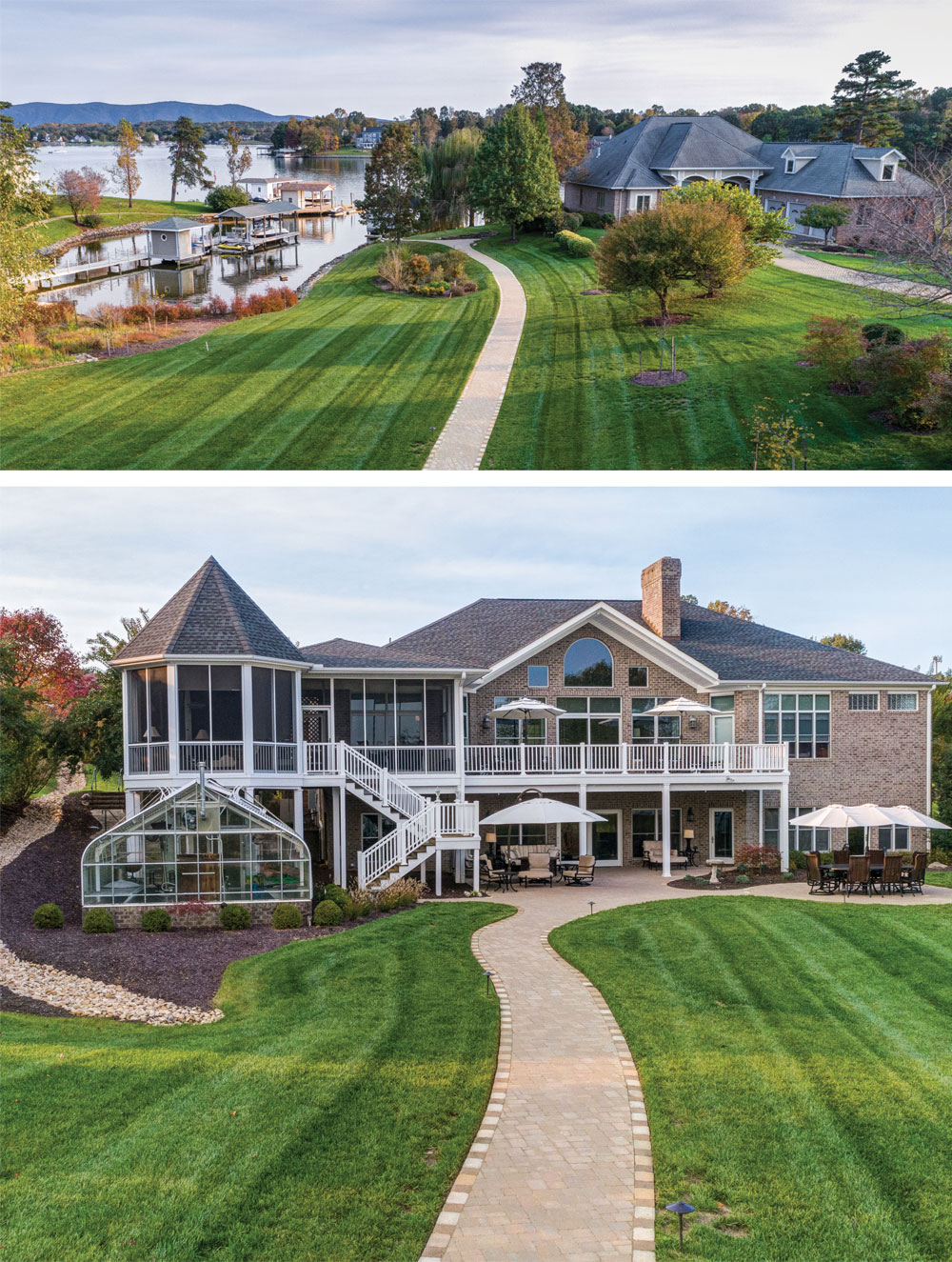 THE WEINHARDTS RELIED ON MARK MASLOW AND HIS TEAM AT SOUTHERN LANDSCAPE GROUP TO TRANSFORM THEIR OUTDOOR SPACE WITH NEW LANDSCAPING AND HARDSCAPING.

There was opportunity to bring a more contemporary look, with more versatile and muted white and gray tones, which has also helped the home feel brighter. 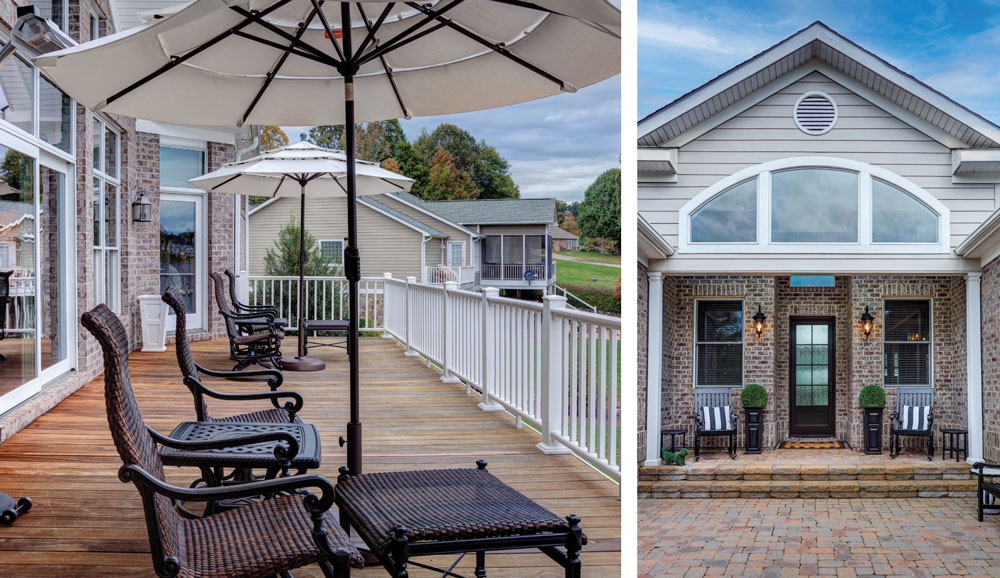 The couple closed on the property in July 2019, and demolition work began soon afterward. By that Labor Day weekend, they had moved from Rochester Hills, Michigan, the relocation prompted by John’s retirement as CEO of an auto parts supplier.

“Once he retired, we looked at each other and asked if we wanted to spend another winter in Michigan,” Karen says.

Two of their six children already lived locally in Vinton and Troutville, so the Weinhardts knew the Smith Mountain Lake area well. And this region offered more incentives—not the least of which was less threat from hurricanes—than the coastal Southeastern locations they were initially considering.

“We love nature, and we love wildlife,” John says. “Our house in Michigan backed up against a wildlife preserve. Obviously, here we’re on the water in a beautiful setting.”

They’re on a flat, 1.5-acre lot, with the home set slightly away from the water. They have 160 feet of shoreline and, after the renovations, a four-bedroom, 3.5-bath home to enjoy, comfortably sleeping 10.

“We like the fact that we’re situated back from the water, so that we have a nice backyard to utilize but are also able to look across to the lake,” John says.

Its birth into something livable
When the Weinhardts finished selling their home in Michigan and arrived at the lake in late summer 2019, they were greeted by a post-demo home that was just a shell of its former self. Most notably, there was no kitchen to speak of, just a refrigerator plugged in at an out-of-the-way spot, as well as a Crock-Pot and an Instant Pot. Karen jokes that over that nearly 12-month span (made longer because of coronavirus-related delays) she became a pro with the slow-cooker and multicooker.

Living at the house while the work was going on, with the chaos of so many people in and out, “That was something I’ll never do again,” Karen says.

But that’s more because of the confines of the situation, being isolated to just a couple of rooms. Both John and Karen say they enjoyed meeting and interacting with all of the contractors who worked on the house, and even to this day, now that work is essentially completed, they miss having those crews around. Other than the “awkwardness” of trying to live in the house during the construction phase, with all of its plentiful noise and foot traffic, being on site helped them manage the project, John says. “We could participate in decisions on a regular basis.”

Being retired and able to directly show a contractor what they wanted in a particular part of the house or to be able to go into Roanoke to pick out lighting, cabinet hardware or other elements at a moment’s notice helped smooth the renovation process.

The main level was set up so that the couple could age in place, with much of the entertainment and guest space situated in the lower level. Part of the strategy in selecting this house was that it was big enough for them to keep all of the furniture they had in Michigan.

The kitchen, designed by Lara Lee Strickler of Ideal Cabinets, Inc., is one of the focal points of the main level, with white cabinetry, ample counter space, and a lot of visibility into the great room. A large section of the wall between those rooms was removed, as was an unnecessary doorway. A beautifully crafted gray table that seats eight lines the window side of the kitchen, while skylights usher in natural illumination above the sink.

“I love my kitchen. I enjoy cooking, and I love having the grandkids in here,” Karen says. “It’s large enough that they can all pile in.”

The flooring, from The Floor Source, is a manufactured wood floor that is utilized throughout both levels of the house. It’s completely waterproof and scratch resistant—being functional for dogs and grandkids while still looking great in the process.

In the great room, the fireplace was rebuilt with light gray stonework and a prominent mantel. A cascade of windows, climbing to the top of the home’s vaulted ceilings, provides striking views of the lake. Here, Karen worked with Mishelle Brosinski, owner of Envisions Flooring and Interiors, to add motorized sheer shades to cut down on the glare and the heat that the windows were creating. The colors and shapes for the great room’s window treatments, custom area rugs and carpeting for the stairs down to the lower level tap into the design that was used in the kitchen.

Just outside is a deck abutting a superbly inviting screened-in gazebo, with the grill and comfortable furniture just begging you to kick back and relax. It is a favorite place for the couple to spend their time.

Off the great room are two white French doors that open into the comfortable yet sophisticated office, the same one where the couple spent much of their time that first year of construction.

In the hallway to the living area, one wall was moved a few feet to allow the master bedroom to be larger, so that some of the couple’s favorite furniture pieces—two large cherry-hued armoires with intricate grain designs—would be able to fit comfortably in the space.

On the wall behind the bed, Karen had the builders create a battened panel wall that picked up elements from their previous home in Michigan. This treatment gives the room texture without the clutter of added wall hangings. Also on that wall, a sliding barnstyle door leads into the master bathroom and closet, which expertly continues the square pattern. Whether the door is opened or closed, the design is so precise that the pattern blends seamlessly. 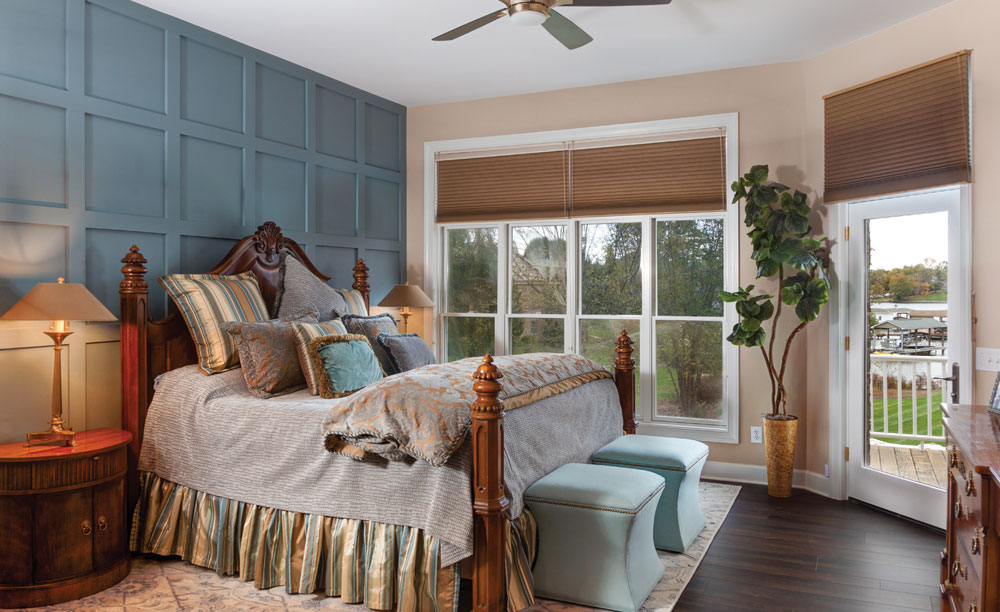 “I’m thrilled with the way it turned out. It’s exactly what I asked them for,” Karen says. Even the iridescent Labradorite door pull stands out, and the couple loves that when the sun hits just right, vibrant colors dance off of it.

In the bathroom, a double sink with a granite countertop lines one wall, while a shower with a stunning combination of tile and glass is nestled in the corner. “The blue color and the flowing pattern of the tile reminds me of the lake,” Karen says. Windows along the top of the room let in natural light, further accentuating the nautical feel of the tile.

On the other side of the room is the entryway to the master closet. The clothes are set into individual closet cabinets, each with mirrored faces, giving a sense of infinite depth for the space.

Opposite the master bedroom are two guest bedrooms, one of which has twin beds, perfect for when some of their seven grandkids come to visit.

The half bath on this floor particularly stands out as what Karen calls her “blingy” bathroom: Sparkled grout is used around the hexagonal floor tiles, and the glittery wallpaper features golden trees from floor to ceiling.

Entertainment destinations
The stairs to the lower level originally had spindle railings that were visually obtrusive. Franklin Glass was brought in to install glass panels in place of the old spindles, which help to significantly open the space. 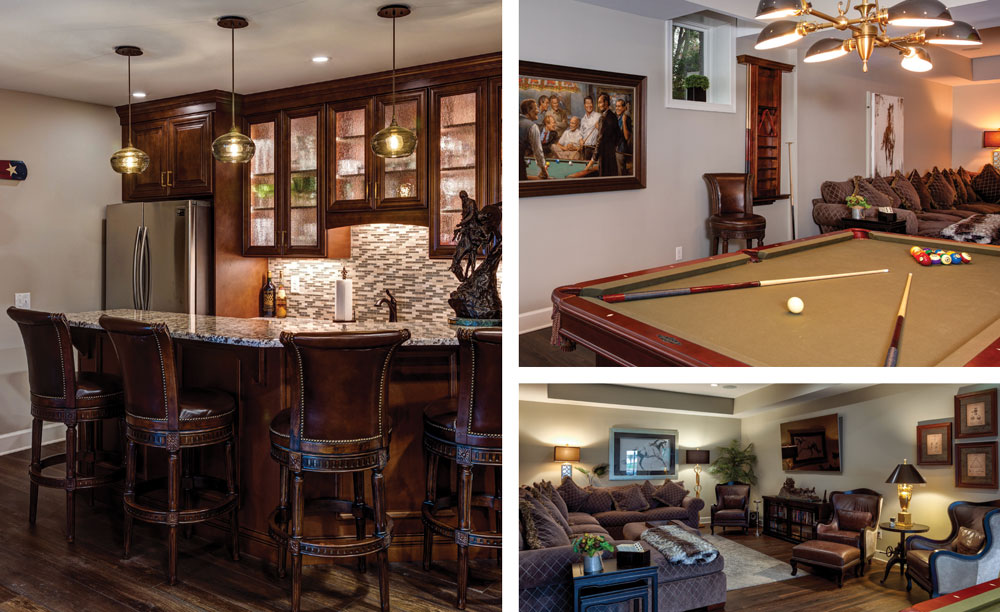 It’s clear from taking the first step in the lower level that this is where much of the entertaining and recreation happens when people visit. Here, a pool table is overseen by a painting that depicts some of history’s most famous U.S. presidents socializing together. Elsewhere on the walls are framed replicas of the original patent drawings for various aspects of the game of pool, such as the table itself and the cues. The six-arm light above the pool table is a replica based on classic pool table fixtures popular in the early 1900s.

Adjacent to the pool table, the Weinhardts removed a wall that had led into a sizable storage room. They’ve turned it into a media lounge; it’s essentially movienight central when family is visiting. A multi-sectioned L-shaped couch fills nearly two full walls, and built-in studio surround sound makes this a great place to enjoy a show.

On the other side of the lower level is a seating area and another fireplace, which was converted from woodburning to gas. A bar area, designed by Dan DeNeal of DeNeal Cabinets, is tucked into one side of the main room, with some added space thanks to a wall being removed during the renovation.

The house’s third guest room—the only one with lake views and thus the one most visitors “fight” over—is down a short hallway with a completely refurbished full bath next to it.

“This bedroom is the one everyone wants to stay in,” Karen says.

Nearby is a workout room and a large storage area.

The lower level spills into a backyard that, like much of the rest of the house, was completely redone. With work done by Mark Maslow and his company Southern Landscape Group, a cozy patio area was built, flanked by mulch and small garden areas.

“Mark and his team were great guys. We love them, and with my love of landscaping, we’re going to be lifelong partners with them,” Karen says.

A long paver path was added down to the boathouse, which sits next to a scenic weeping willow tree. The boathouse has a floating dock for their Sea-Doo, and there’s a covered slip for their tritoon, plus a sitting area.

The Weinhardts have plans to change the landscaping in the front yard in the near future, while also working on the deck and some other aspects to fine-tune their home. And, perhaps, they will be blessed with a year that isn’t like 2020 and will be able to better share their space and their new lives with more of their family. ✦

Previous Post: When Custom Comes to Life
Next Post: Outdoor Lighting | Illuminate the Nightin Style with These Tips From the Experts 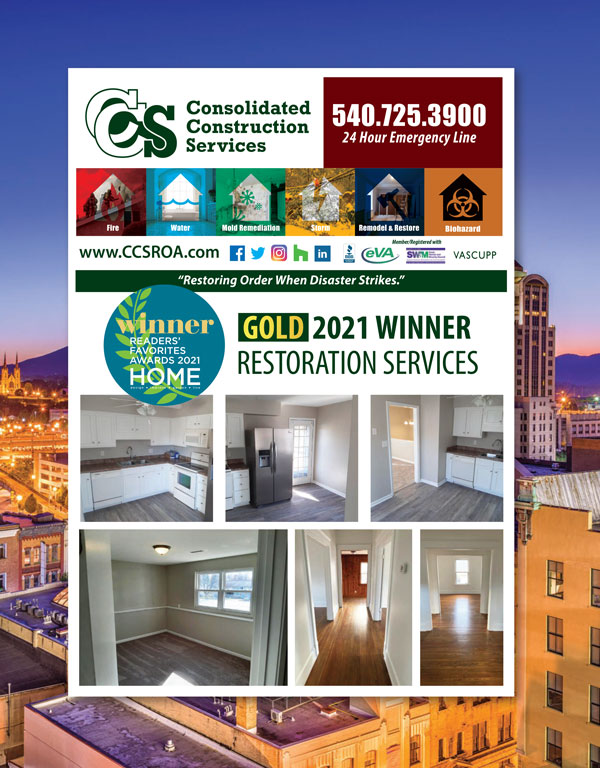