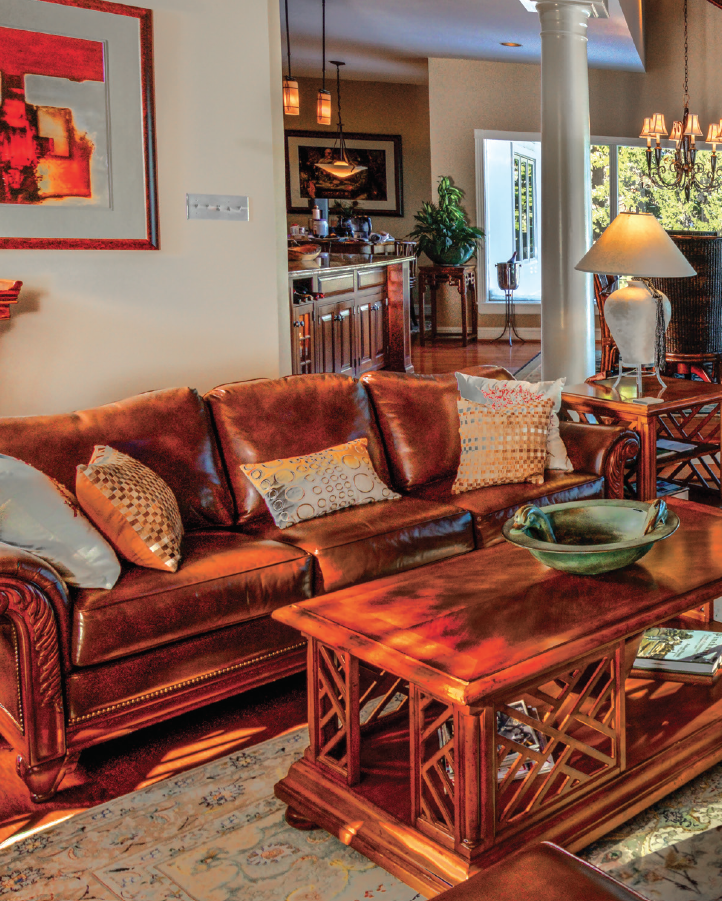 It’s no surprise that the white carpet in Floyd Merryman’s Smith Mountain Lake home was the first thing the dog owner replaced when he bought the property.

“We closed on this house during October, and the first Thanksgiving we had here, it was pretty nasty weather,” he says. “It was wet. The dogs went outside, and when they came back in on the white carpet, well, it wasn’t white anymore.”

Since those early days in 2005, the home has continued a transformation that culminated in adding more than 3,000 square feet and a second garage just a few years ago.

“In 2012, I did the addition, which really made the house what it is today,” says Floyd, who lives in a cove in The Water’s Edge.

What stands now is an interior styled with exquisite dark hardwoods and venerable white columns, enlivened by skylights in the living room and dining room. Couple that with an exterior that includes a beach, an inviting outdoor kitchen and the splendor of being nestled amid one of SML’s premier golf communities, Floyd and his partner Roya Gharavi have a residence they can genuinely call home.

Floyd has been exposed to the lake all of his life. In the late 1950s, his grandfather bought 100 acres in Goodview’s Beaverdam Creek area in preparation for the damming of the Roanoke and Blackwater rivers to create SML. The property, which they called Merry Acres Farm, would ultimately include a mile of shoreline.

“All my life, I’ve known about Smith Mountain Lake,” Floyd says. “I can remember as a child going down one summer and wading in the creek, and then the next year, the water was up. Before long, it was probably 50 yards across.”

Over the years, he continued to visit the lake, going boating with a friend who had a cabin near Mitchell’s Marina. However, it was in the 1980s, when The Water’s Edge was developed, that the avid golfer decided that he wanted to have a home at the lake.

“The golf course was like nothing else around, with the water and the views,” Floyd says.

He initially went in on property with his sister and built a house in The Water’s Edge that could be used as a family home. About 15 years later, he decided he wanted a place of
his own—as it turned out, his current home, one of the first built in the development, was on the market. 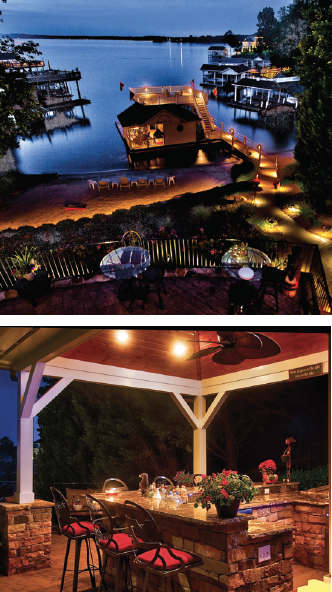 “The thing that kept me coming back to this house was the view—you’re looking right out the main channel—as well as the dock and the beach,” he says.

Yet it’s clear that the house standing today, measuring about 8,000 square feet, bears little resemblance to the one built in 1988 three owners ago. Impressively, from the time Floyd first saw the home, he had a vision for what could be done with it. 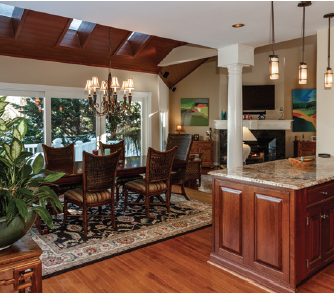 Much of the main level had been decked out in white carpet and what can generously be called “unattractive” tile. The ceiling had an unflattering pickled finish. Today, dark hardwood floors creep throughout all corners of the home, augmented by well-placed rugs and walls that are anything but boring white. Brown leather furniture and a stately marble fireplace are among the first things a visitor sees when entering through the front door. Even the pickled ceiling has been turned into a dark brown to tie the main living areas together.

From the adjacent kitchen, it’s easy to see through the dining room out to the water. While the kitchen had been remodeled prior to Floyd acquiring the property, he initiated more change to the spacious room, adding cherry cabinets, new granite countertops, stainless steel appliances and dual refrigerators with doors that blend seamlessly with the cabinetry. 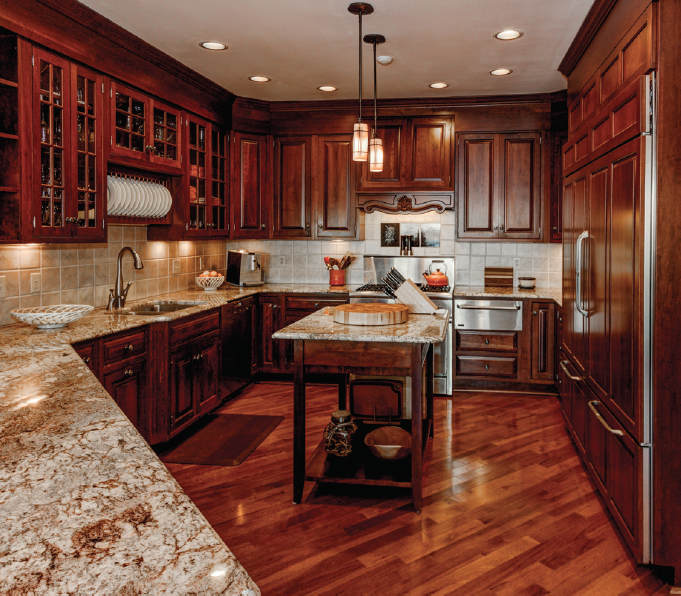 As part of the 2012 expansion on the wings of the home, Floyd added a second two-car garage that included a half-stall for his Virginia Tech-themed golf cart. Also at that end of the house is his office, which has an unobstructed view of the lake and is adorned with trophies and other memorabilia. Floyd works at Sonny Merryman Inc., an Evington company his father founded that sells buses and other commercial vehicles and heavy equipment. 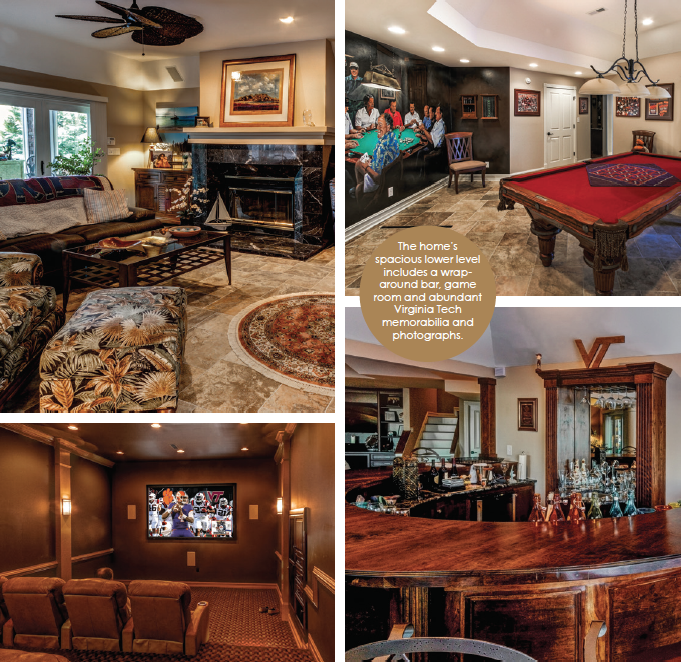 “I work from home an awful lot because I can do anything here that I can do sitting at my desk at work,” he says.

The master bedroom, also on the main floor, is complemented by a jaw-dropping closet, equipped with an island large enough to house rows upon rows of garments. Also off the bedroom are separate his and hers bathrooms, along with elegant tile shower that unites the space. Off the other end of the bedroom is a glassed-in sitting area features one of the home’s best views.

“This was all in my head about what I wanted when I bought this place,” he says.

Floyd’s basement runs the length of the house and was expanded by Southern Edge Builders at the same time the main level was renovated. The basement has tall ceilings that give a surprisingly open feel to the lowest level.

In one section of the basement, Floyd tore down a wall and had a wrap-around bar installed. Next to that, a game room with a pool table and dart board showcases Virginia Tech athletics through and through. Floyd’s family has deep ties to Tech, with his father being the name behind the school’s Merryman Athletic Facility, which was built in 1998. The game room has one wall painted with the likenesses of Floyd’s card-playing group, including an image of his father. The other walls are packed with Tech memorabilia and photographs. 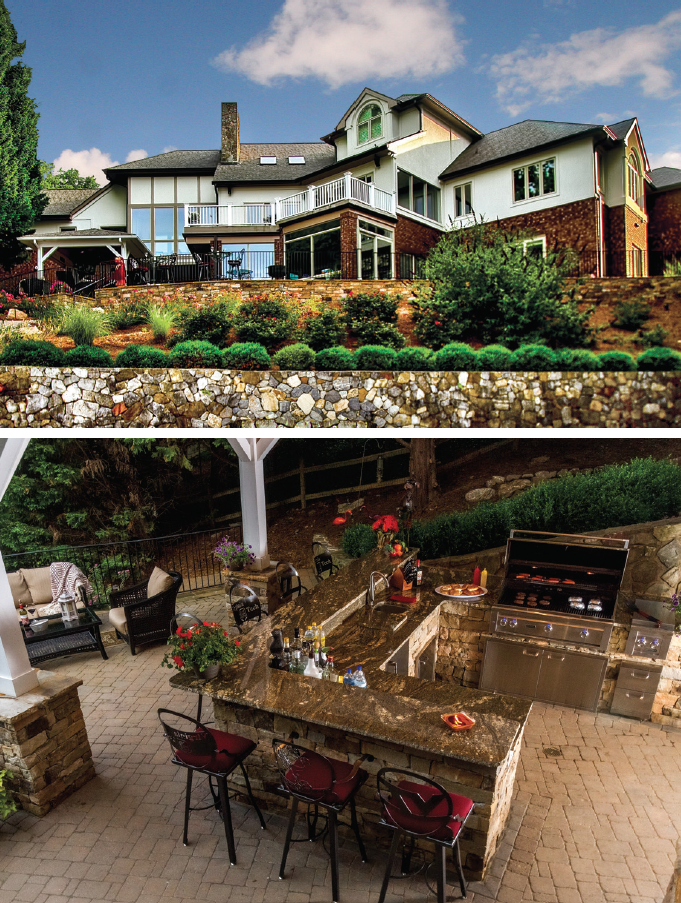 Through that room is an eight-seat theater, which was built directly below the garage addition. The basement also features two bedrooms, one of which has a doorway leading to the outdoor kitchen, which was constructed by Mark Maslow and his team at Southern Landscape Group Inc. in 2010.

Southern Landscape removed the old wooden decking and created an outdoor living space that completely changed how Floyd would use the lake side of his home. As Maslow puts it, the goal of the project was to promote functional, fun outdoor living that accentuates the views. 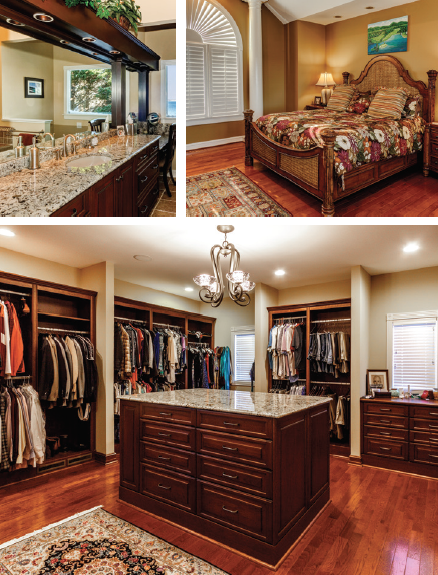 “With the gorgeous views of SML, we wanted to capitalize on them and create an environment that would allow him to entertain groups from small to large,” Maslow says. “We designed a natural stone retaining wall, covered tiki bar area, full-service outdoor kitchen, entertainment patios, pathways to the lake for wheelchair access, extensive landscape plantings and exterior landscape lighting.”

The centerpiece of this space is the full kitchen that has bar-top seating for 12 people. There is a high-definition TV, audio speakers, refrigerator, ice maker, grill, storage cabinets and custom granite countertops.

“It allows each guest to take advantage of the many amenities you typically enjoy inside a kitchen, but here it is outside and lakefront,” Maslow says. “Whether it is a football game, golf match or presidential debate, you can enjoy it all while staring at the peace and serenity of the lake.”

The stone walls were carried throughout the project and tied into column bases for the tiki bar. P 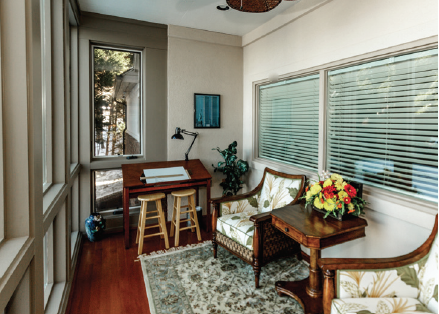 avers for patio surfaces transition into pathways and driveways. It’s clear that the flow of people and traffic was given careful consideration.

Certainly not to go unnoticed is that the seating near the bar includes two stadium seats that were once part of Yankee Stadium.

The final part of the home—which was in the building’s original layout—is the second story, which is used by visiting family and friends. A large guest bedroom is right off the stairway, and there’s a bonus room that has multiple beds for kids. Floyd added a bathroom onto the guest room to give it more of a suite feel.

No detail of the property has escaped Floyd’s influence. The home may not have been built by him, but it channels his vision and his tastes from top to bottom. 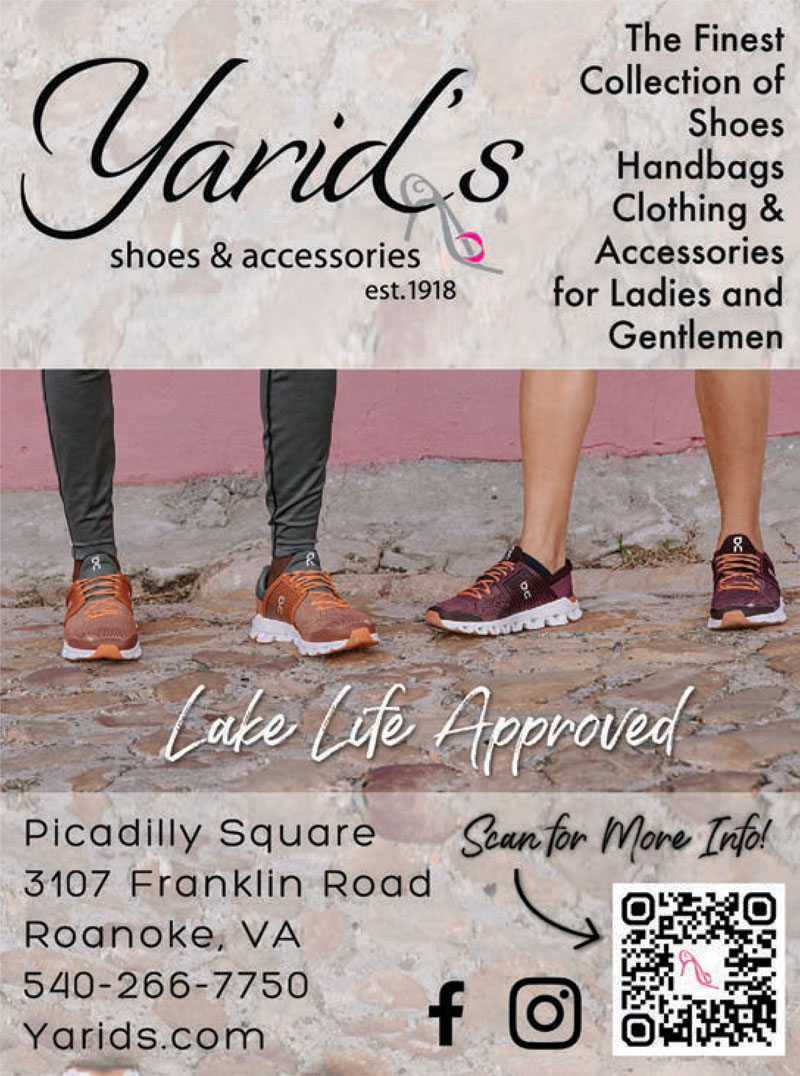