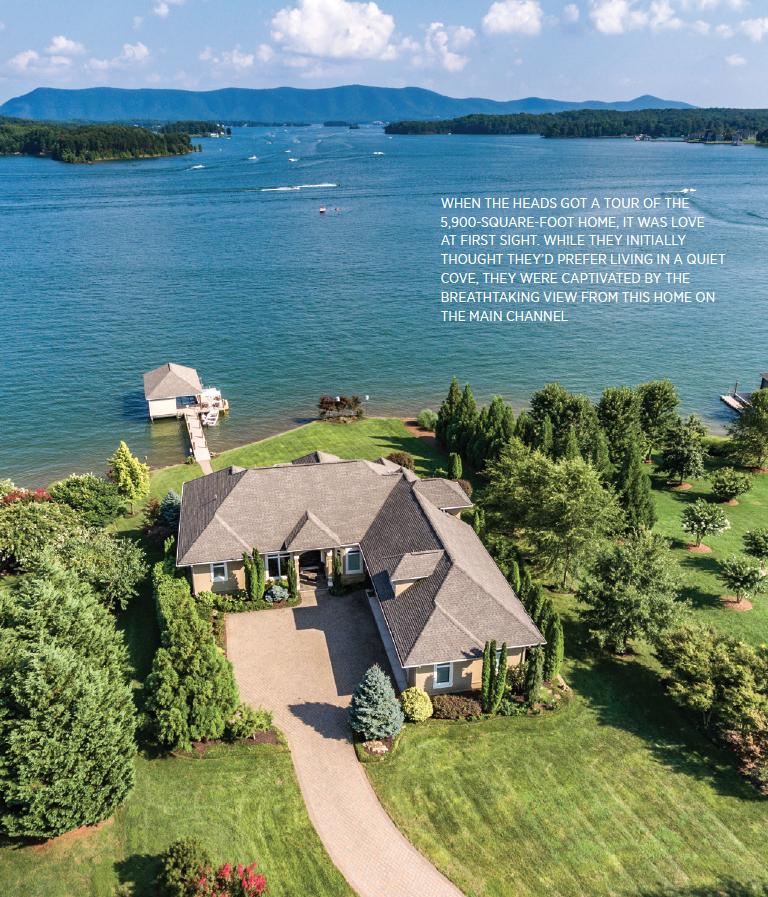 Meg Head has a little advice for house hunters at Smith Mountain Lake: Don’t rule out a property just because the online listing lacks “wow factor.” Meg and her husband, David, nearly missed out on their dream lake property after blowing off a listing with sub-par photography.

“We quietly started looking at properties in 2015 just to get our feet wet because we knew we wanted to retire at the lake,” Meg says. “Our realtor laughed at us because we looked at two condos first. We have four kids, two dogs and a cat.”

The Lynchburg couple continued to search for a single-family home to match their long list of wants and needs and soon came across a website listing that sounded promising. It was for a home in the Franklin County community of Park Place, but Meg dismissed it after scanning through the photos, which were dull and presented in no particular order. 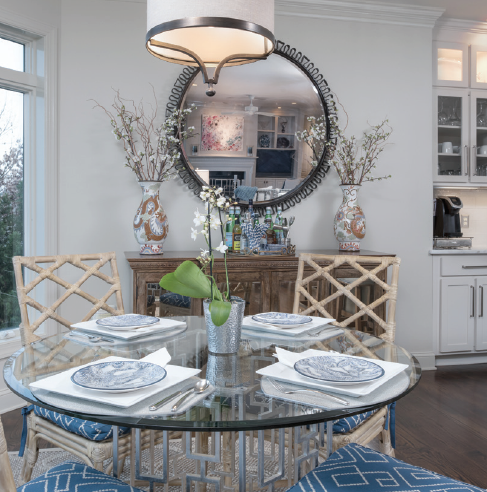 “They made the house look chopped up, and just didn’t do it justice,” she says. “But then we had friends drive by here by boat and they said, ‘Oh, my gosh, this is it. You have to see this view.’ So another thing we learned about house hunting here is it’s always smart to view the house by water.” 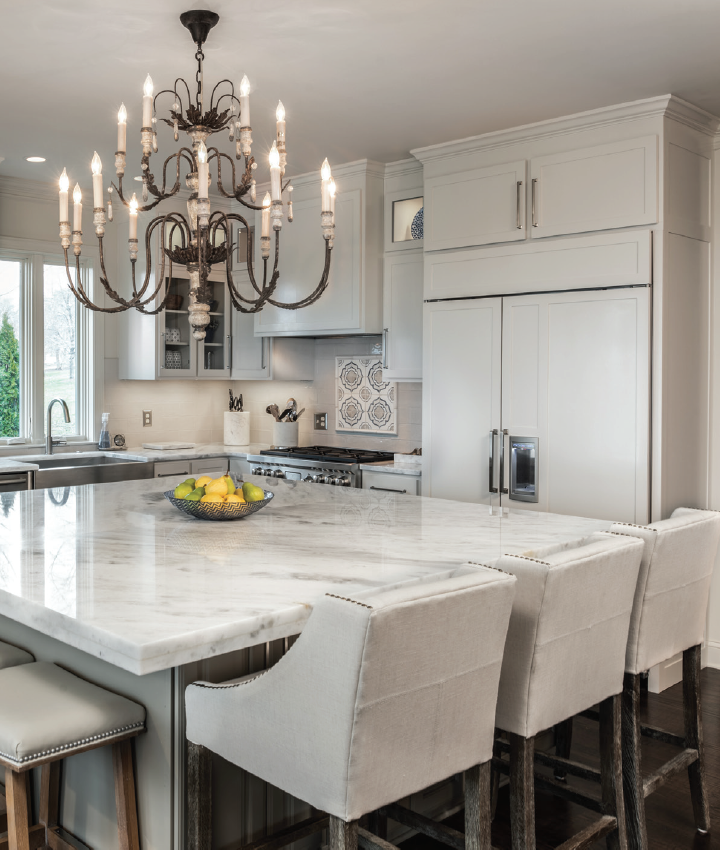 When the Heads got a tour of the 5,900-square-foot home, it was love at first sight. While they initially thought they’d prefer living in a quiet cove, they were captivated by the breathtaking view from this home on the main channel, just around the bend from SML Community Park. A view that includes long water and a wide shot of Smith Mountain is visible from nearly every room in the house.

The Heads purchased the home, which was built in 2007, in October 2015 with plans to use it on the weekends while renovating it to their personal taste. Three of the couple’s four children—ages 18 to 23—live on their own and when the youngest heads to college in the fall, Meg and David say they’ll begin making plans to make SML their permanent home.

The couple brought in Moyanne Harding of Lynchburg-based Interiors by Moyanne to help with the renovations to the property, which features six bedrooms and four-and-a-half bathrooms on three floors. One of the first orders of business was to sand and stain the hardwood floors, which had an unappealing orange tone, a darker color to provide a consistent look throughout the main level. They also painted the entire interior. 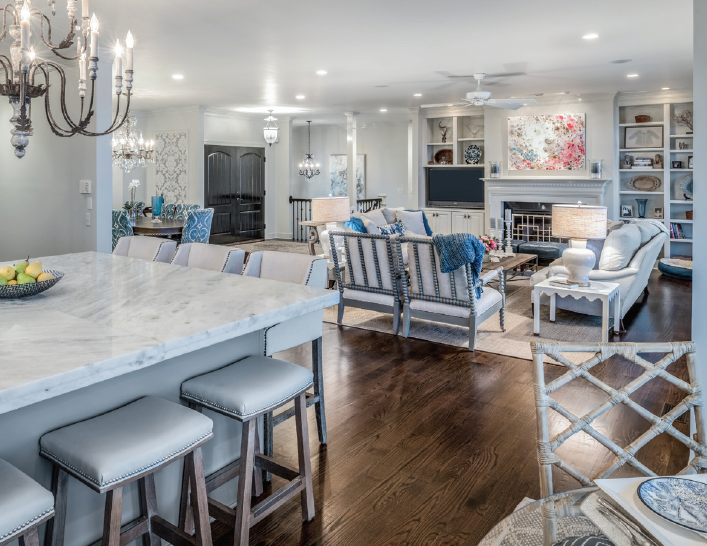 A completely remodeled, crisp white kitchen with small breakfast nook overlooks the lake and is where the family spends a good deal of time, David says. During the renovation the Heads added new counters, cabinets and appliances. They also reduced the size of the huge marble island to seven feet by seven feet so it wouldn’t encroach as much on the adjacent living area. The change allowed for three additional bar stools to be added.

“It really opened the living area, which is nice because now everyone doesn’t necessarily congregate in the kitchen,” David says. “But when they do, there’s plenty of room for them to sit.”

Off the kitchen is a large walk-in pantry, powder room and access to the upper level and three-car garage.

To keep it simple and complement the beauty of the outdoors, Meg says she worked with Moyanne to decorate using neutral beiges, blues, grays and whites with splashes of bright pink. There are two facing couches plus casual chairs and leather-covered stools for ample seating. Meg says she consciously opted to forgo curtains and blinds on the abundant windows so as not to obstruct the view. 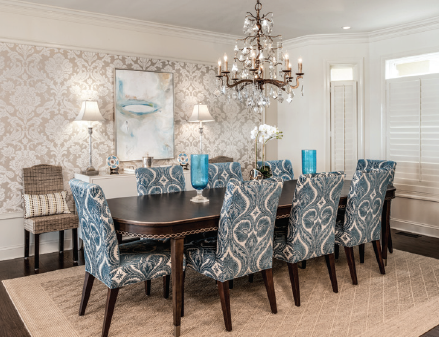 “My home in Lynchburg is really formal, but I wanted this house to be light and casual,” she says. “I’m usually a huge curtain person, but this view is way prettier than anything we could put up there.”

For the formal dining room, Moyanne used wallpaper in a damask pattern and framed it out with molding to provide additional visual interest. The space includes a large table that seats eight and chairs upholstered in a bold pattern of bright blue and white. 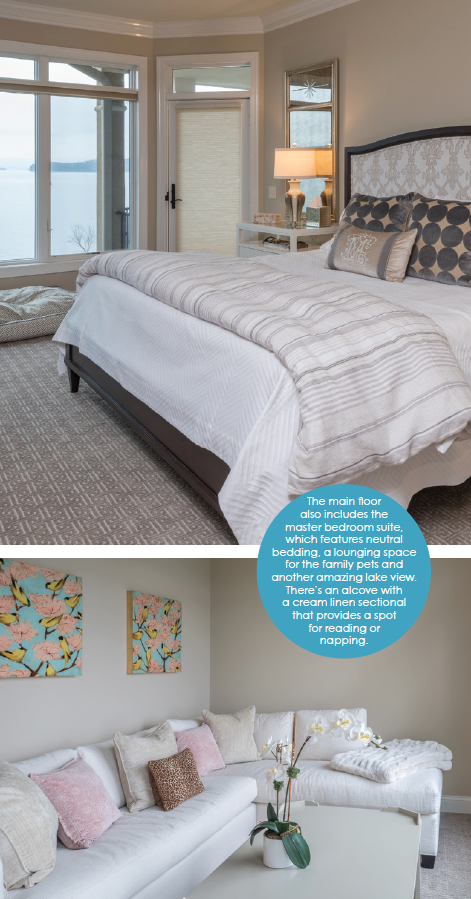 The main floor also includes the master bedroom suite, which features neutral bedding, a lounging space for the family pets and another amazing lake view. There’s an alcove with a cream linen sectional that provides a quiet, comfortable spot for reading or napping. In the large master bathroom, wallpaper in a geometric pattern was added and hardware replaced to freshen up the space.

Meg enlisted Smith Mountain Lake designer Kris Willard of Interiors by Kris for design assistance on the other two levels, which are used frequently to accommodate family and friends.

“She came in and helped put the finishing touches on everything,” Meg says.

Upstairs is a suite that’s perfect for when Meg or David’s parents come to visit. It features a king-sized bed decorated with linens of bright turquoise and green and a small seating area with a couch in coordinating colors complemented by white lacquer tables. There’s a roomy closet and dressers that double as nightstands, a bathroom with large walk-in shower and a small outdoor deck with perhaps the home’s most stunning view.

Across the hall is what Meg refers to as the bunk room—a long, narrow space with sloped ceilings, dormer window, cozy reading nook and six single beds, which are occupied frequently in the warmer months by the couple’s college-age sons and their buddies. 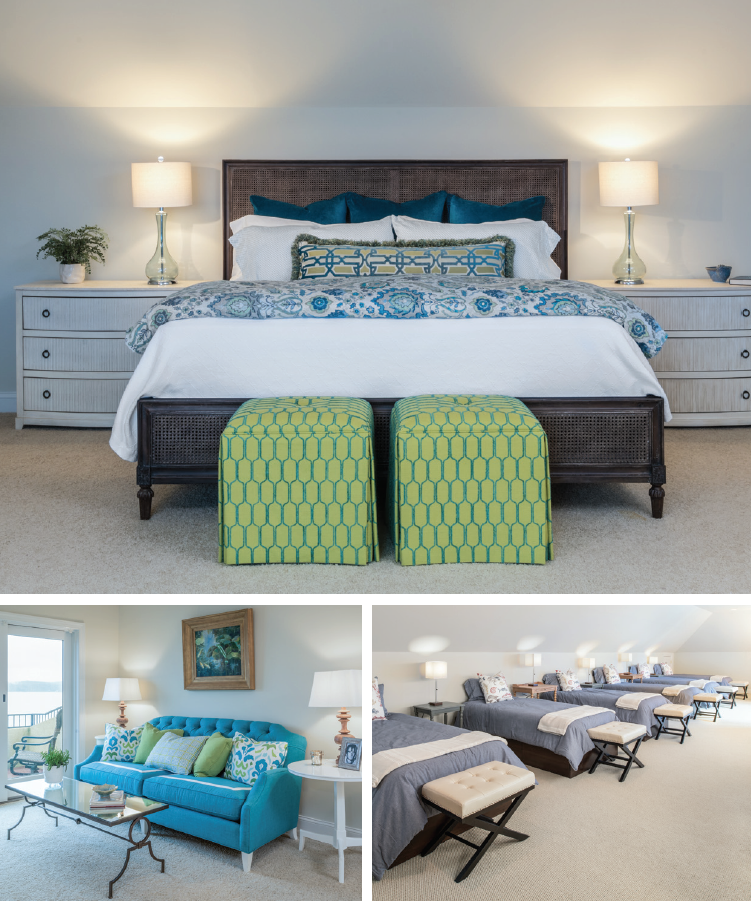 “There’s never a weekend without lots and lots of kids here,” Meg says. “We can sleep a lot of guests now. We really wanted to make sure everyone who wanted to come and stay would have a bed.” 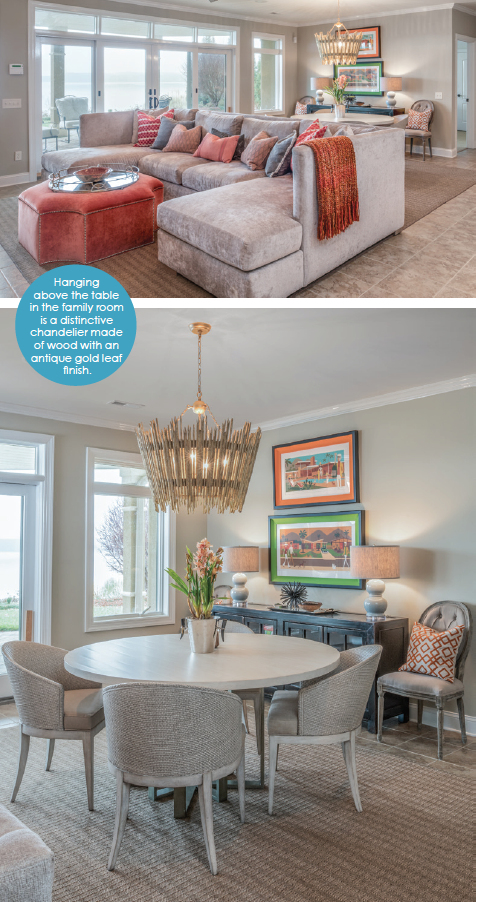 Three additional bedrooms and two bathrooms can be found on the lower level, which walks out to the lake side of the home. There’s also a warm and inviting family room with a comfortable sectional sofa facing a large television and a big, round table the family uses for working puzzles and playing cards.

“We needed a table that would seat six but we didn’t necessarily want to have six chairs there all the time; we knew it would look crowded,” Meg says. “So Kris suggested adding a sideboard below the artwork and moving the two extra chairs on either side. I was skeptical but it looks great, and it just makes the room so much more functional.”

Hanging above the table is a distinctive chandelier made of wood with an antique gold leaf finish.

“I had admired the chandelier in the past and was so excited when Kris said she thought it would work over the table,” Meg says. “I loved that it was wood and had a modern feel to it.”

Much of the artwork throughout the home is by local artists and Meg touts Southern Provisions Company in Lynchburg as the source of many of the home’s distinctive accessories. She also worked with them to create many of the handmade pillows, which are expertly mixed and matched indoors and out with a variety of colors, patterns and textures.

The outdoor living areas are plentiful at the Head home, too. There’s a small seating area off the lower-level family room and, upstairs, a spacious covered veranda the couple uses as an extension of their living room. Overlooking the yard, dock and lake, the veranda includes a rattan u-shaped couch covered with durable outdoor fabric in a neutral beige and a teak dining table that comfortably seats six.

“We love sitting out here and watching all the activity, all the boat traffic,” Meg says. “But it’s pretty in the morning, too, when everything is quiet.”
She says friends and family also enjoy the home’s gently sloped lot and relatively short walk to the dock, which gets used extensively in the warmer months. The dock includes two chaise lounges with a large umbrella for shade and a separate seating area with neutral furniture accented with pillows in various shades of blue and teal.

The dock’s boathouse stores towels, life jackets and other lake necessities, as well as a mini fridge for drinks and snacks. A bar top becomes accessible when the rollup-door is opened, with two stools providing additional seating.

“We usually plant ourselves on the dock after breakfast and will bring snacks and just spend the whole day down there,” Meg says. 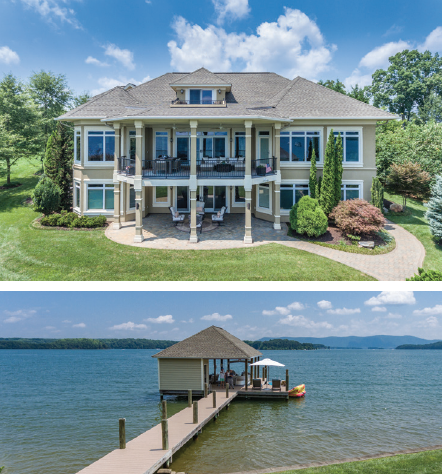 On the side of the home is a small patio the couple uses as outdoor grill space. There’s also a separate room with tile flooring off the garage that the previous owners used for potting and storing garden supplies. The Heads plan to eventually convert it to private office space for David who often works from home.

Meg and David say other aspects of the home they’ve come to appreciate are its relatively low maintenance requirements and its location in Park Place.

“This is a tight-knit community where people live year-round,” David says. “The neighbors are very friendly and inclusive. There’s an email list where they send out updates and they have social gatherings. We’re looking forward to getting more involved as we spend more time at the lake.”

Previous Post: Seamless Transition | Accomodating Ample Water Views & Frequent Guests is what this SML Home Renovation was all About
Next Post: The Addition of Something Great 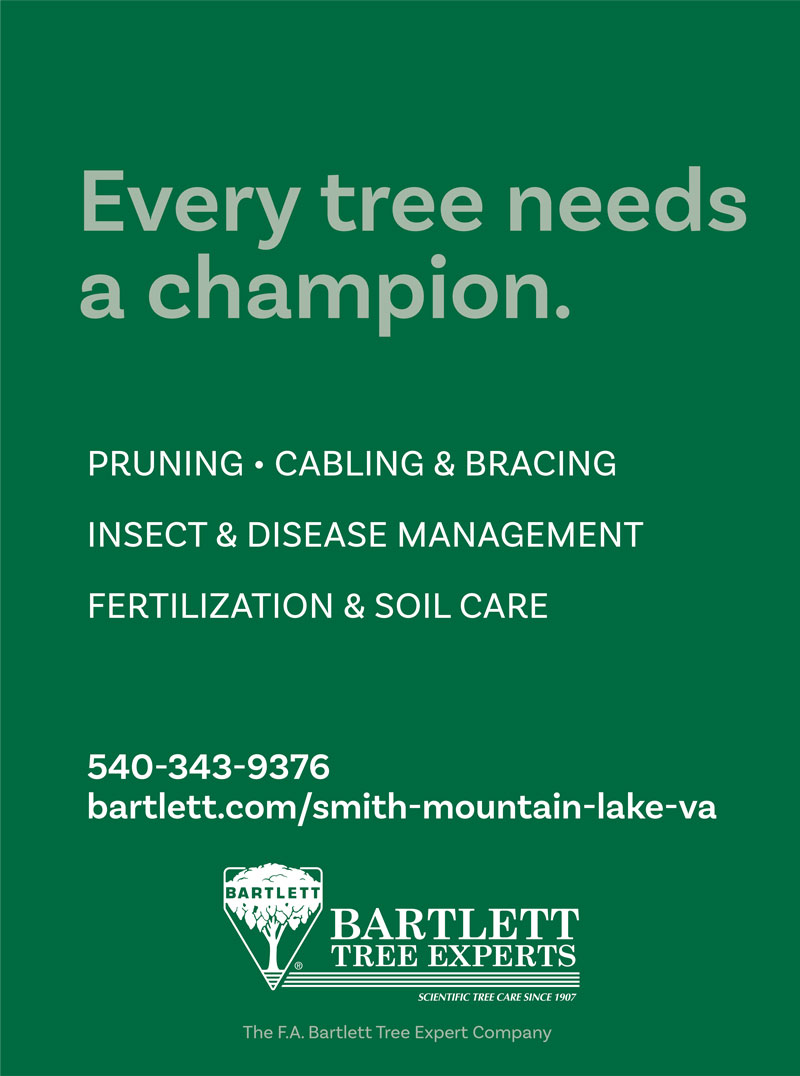