When Carol Noesner wakes up in the morning, the first thing she sees is water.

It’s perfection—the beauty of Smith Mountain Lake pouring through the bedroom windows.
That view, created by nearly floor-to-ceiling windows, is the chief reason that Carol and her husband,
Gary, bought their property near The Waterfront Country Club.

The lake, after all, is the reason so many people nestle in the comfort of this part of Virginia’s Blue Ridge. According to Carol, a home should complement the lake experience, not detract from it.

The lake, she says, “That should be the star of the show.” 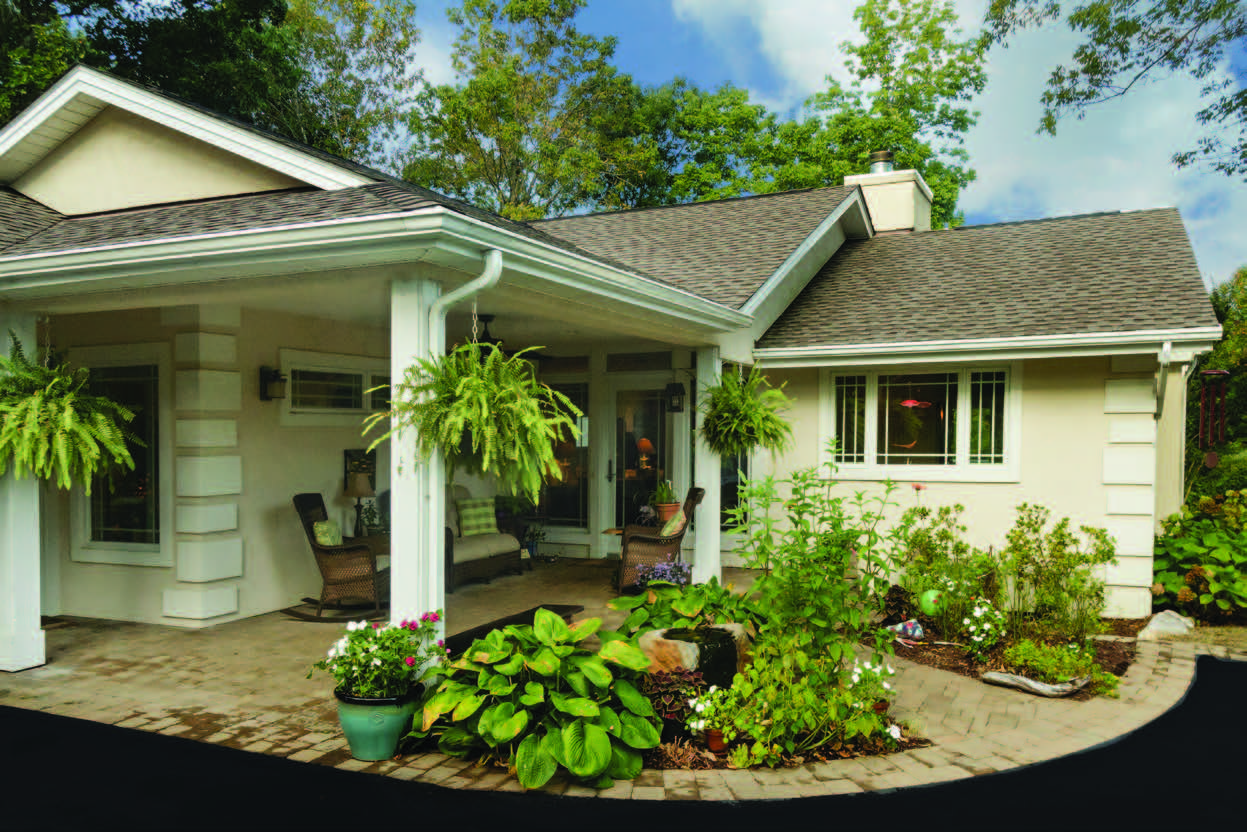 At the Noesners’ home, SML is certainly the star. The property has 161 feet of shoreline, and the spacious dock and boathouse is where they spend most of their time during the warm months. Yet in their 3,500-square-foot home, the windows, sliding doors and deck railings help to amplify the lake’s presence as much as possible.

Since buying the property in 2003 and moving in full-time in 2008, the former Fairfax residents have stretched and renovated their house to suit their style and accommodate frequent visits from friends and family. 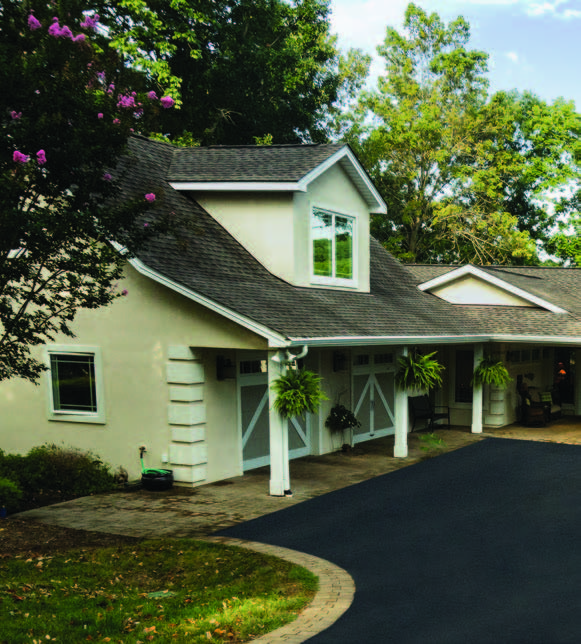 “It’s pretty rare for us in the summer not to have company, whether that’s our kids or other friends,” says Gary, a Florida native who is much fonder of lakes than he is the ocean. “This isn’t a huge home, but it has a lot of bedroom space. So when all of our grandkids come down, it accommodates us well.”

The Noesners’ house was built in the late 1970s and for a long time was a small getaway cottage. In the early ’90s, an addition was created with a lower-level walkout bedroom and bathroom. That would be just the start of the home’s transformation into a beautiful retirement residence. It would be about 10 more years before the Noesners would buy the place and, with the help of contractor John Brock of BrockWorks Inc., put their signature touches on it.

In that 10 years before they purchased the house, the Noesners visited SML for a week-long vacation with their three kids and became intrigued by the area. The couple met while working at the FBI, where Gary rose to be the bureau’s chief hostage negotiator. He later wrote a captivating book about his experiences called “Stalling for Time.” 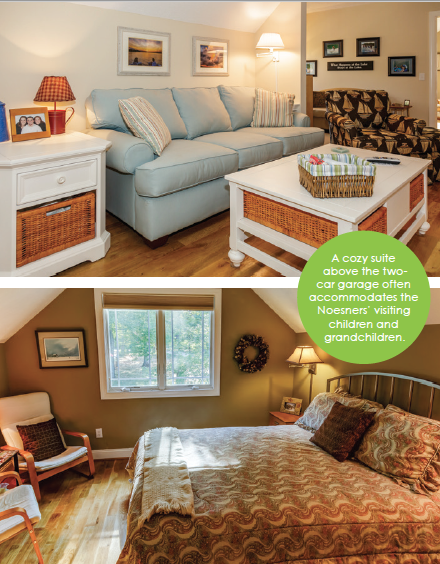 When Gary retired in 2003, they purchased their home at the lake. However, the house spent five years primarily as a weekend retreat while Gary continued to work as a security contractor. A few years later, after three decades in Northern Virginia, the time seemed right to become full-time lake residents.

Looking back on that time, most people probably wouldn’t recognize that cottage as the home that currently sits on the land. This is no longer someone else’s home that the Noesners moved into; it is now theirs, down to many of the tiniest details.

“We made it the way we wanted it for the rest of our lives, which is how long we plan to be here for,” Gary says.

The largest change since 2008 is the addition of an oversized two-car garage with a suite above it, a project spearheaded from start to finish by Brock. He helped to expand the home into a four-bedroom place, with 4.5 bathrooms, and an office for Gary’s FBI memorabilia. In the addition, decorative yet functional lighting inset into the wall flanks the stairs as they lead up to an inviting living space and bedroom. Downstairs, an original exterior window opening was repurposed with stained glass, and a mud room and coat closet were created to help corral the clutter of a large family of visitors.

To build the addition, the front entrance of the home had to be shifted, and it has been beautifully renovated with a new door and windows. 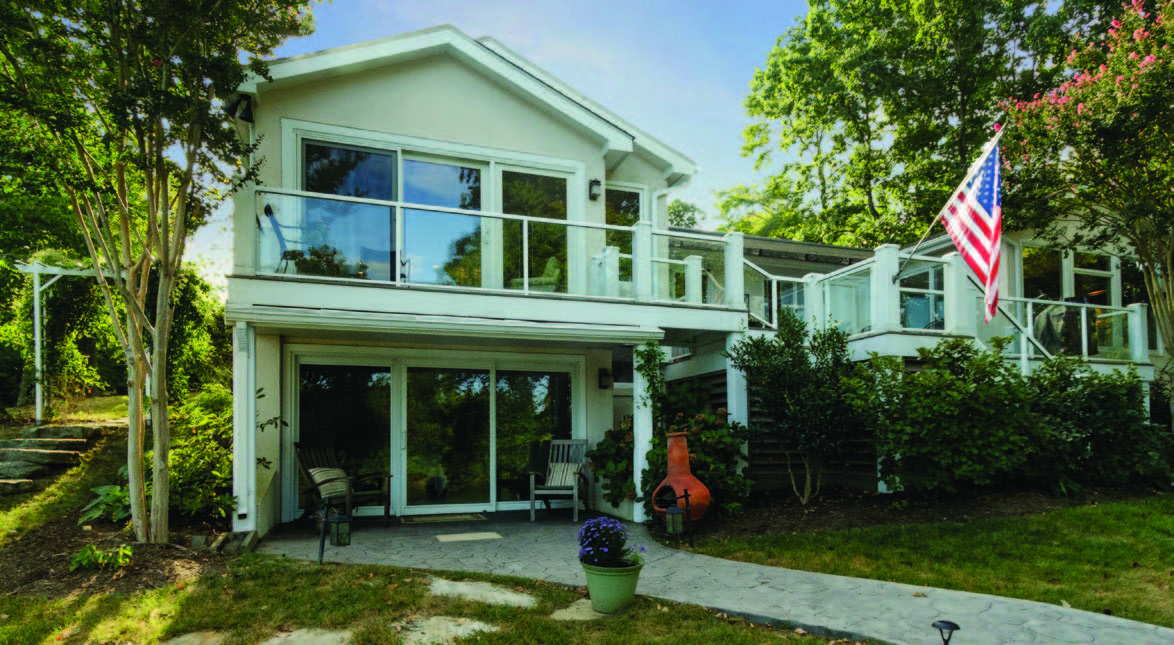 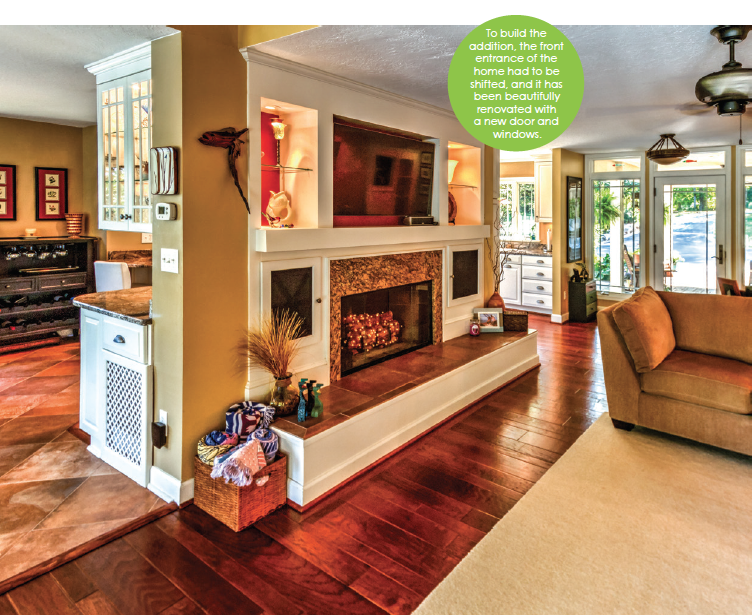 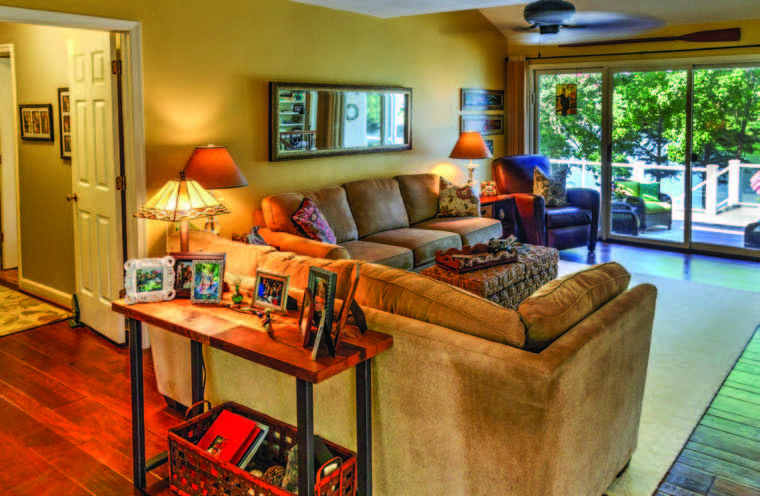 The reality of all of these changes might not have been so apparent to the Noesners without the 3D imaging software that Brock uses. The homebuilder was able to help the couple visualize the changes, allowing them to take the guesswork out of what the final product would look like. Over the long term, Brock says this technology has helped to improve communication with his clients and helps to eliminate any misconceptions people might have about the end result of a project.

“When he brought that in, I felt more comfortable” with the direction of the project, Carol says.

He succeeded, and the addition of the garage and suite ties in with the look and feel of the rest of the home. The old and new blend into one.

“The motto with any renovation is that you want to make it look like it’s always been there,” Brock says.

“I never dreamed it would be so seamless to work with him,” Gary says of Brock. “He would go through great detail to discuss the materials and the cost and the effort for the projects.”

The Westlake-based builder has stayed on the forefront with the imaging technology that was so helpful to his work on the Noesner home. Today, the software helps him to create, in 3D, more realistic projections of the workspace. 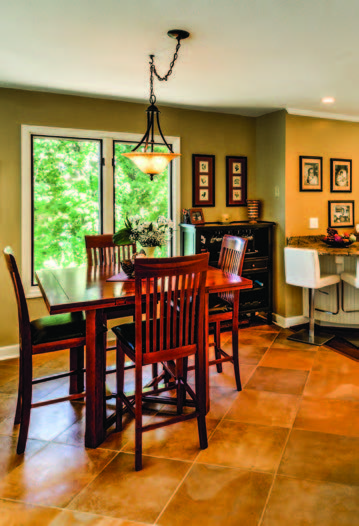 “It’s progressed to the point now where I can do high-quality animation and virtual tours where I can put you inside and you’re spinning around on your cellphone or tablet or computer in the room,” Brock says. “You can look up and all around on the tour.”

In the reality of the Noesners’ home, there’s hardly a place one can look—up or down—and not see change.

The addition aside, Roanoke-based Carter’s Cabinet Shop came in and worked with Brock to remodel the kitchen. New countertops and fixtures were added, new space has been allocated, and where there once was virtually no natural light (the original kitchen had no windows), they now welcome the warmth of the sun. The wall decor includes images of their kids taken from family albums—reminders of how their grandkids now resemble the way their kids used to look. 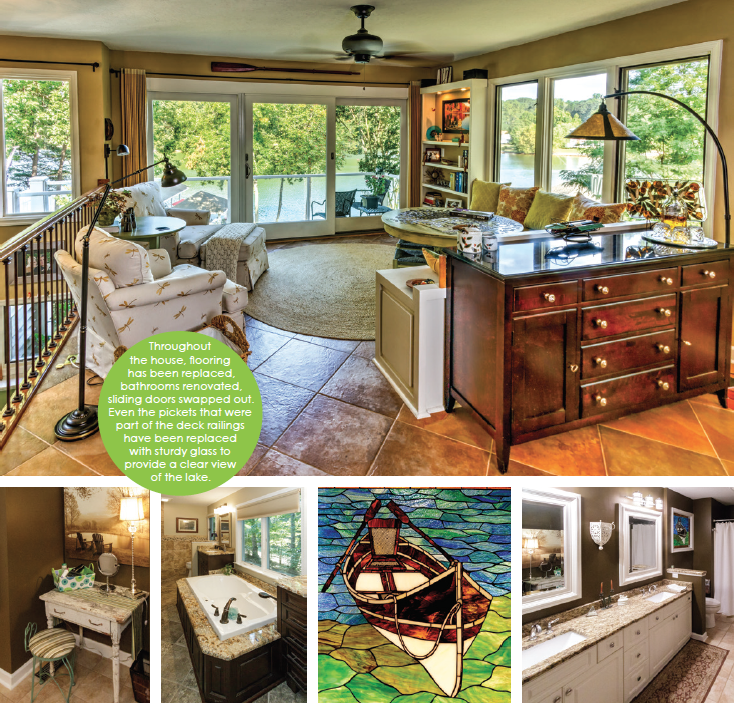 The Noesners forego a formal dining room and instead can gather either at their high table (high enough to see the lake, that is) or in a sitting area adjacent to the kitchen. The space is equipped with ample storage below the seats and built-in bookshelves. The setting is a perfect one for coffee in chillier months.

“This is not a traditional floor plan, so a lot of our friends who come over like it. It’s unique,” Gary says.

Throughout the house, flooring has been replaced, bathrooms renovated, sliding doors swapped out. Even the pickets that were part of the deck railings have been replaced with sturdy glass to provide a clear view of the lake. 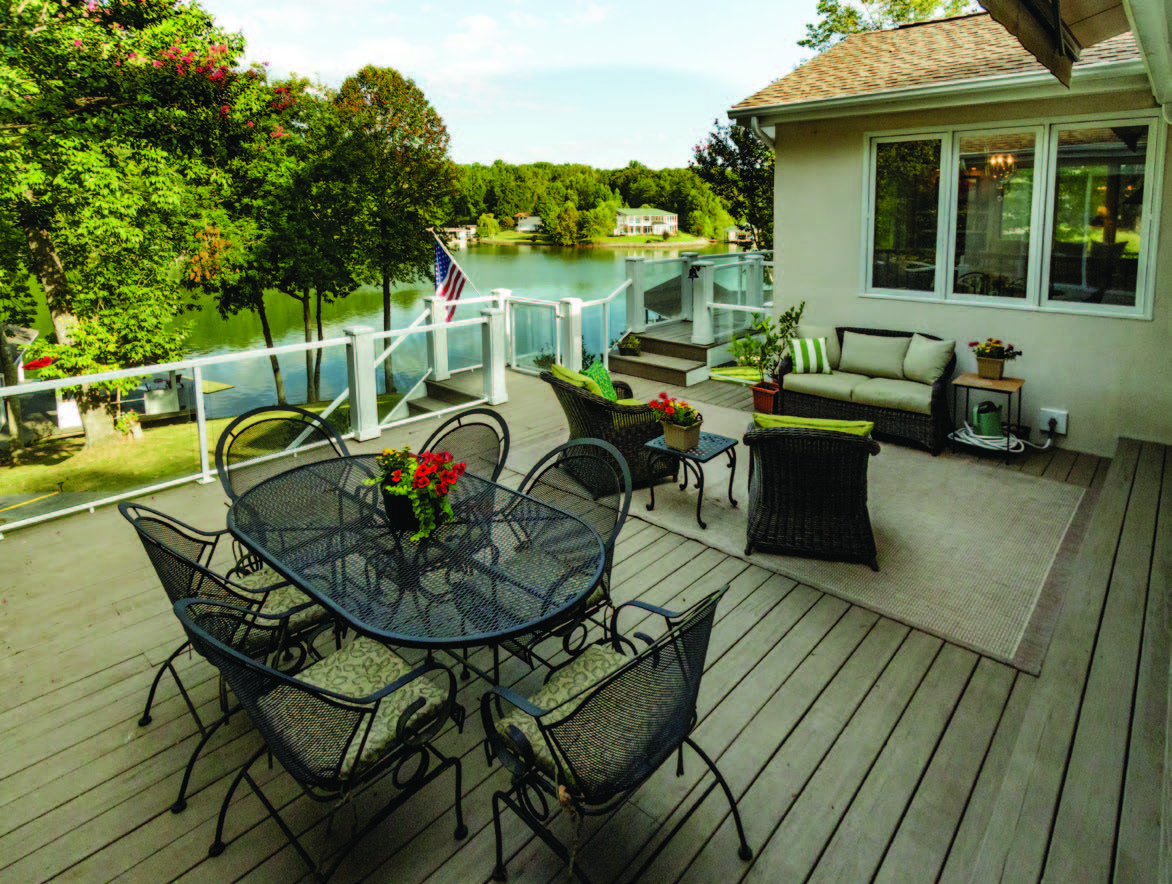 The lower-level bedroom and bathroom, which was created during the first renovation of the house in the 1990s, has been further updated. It’s one of the few rooms in the house that has carpeting, and the glass doors exit onto a path that winds down to the boat dock. It was on this path that Gary had installed a piece of his childhood—a stone dating to 1954 that was recovered from his original Florida home. On it are the names and handprints of him at age 3, his sister and the family dog.

Some companionships never change: To this day, the Noesners only full-time roommate is their dog Charlie, the ideal complement to a life of lake serenity.

“We always thought that when we settled down that we’d love to live on a place on the water,” Carol says. 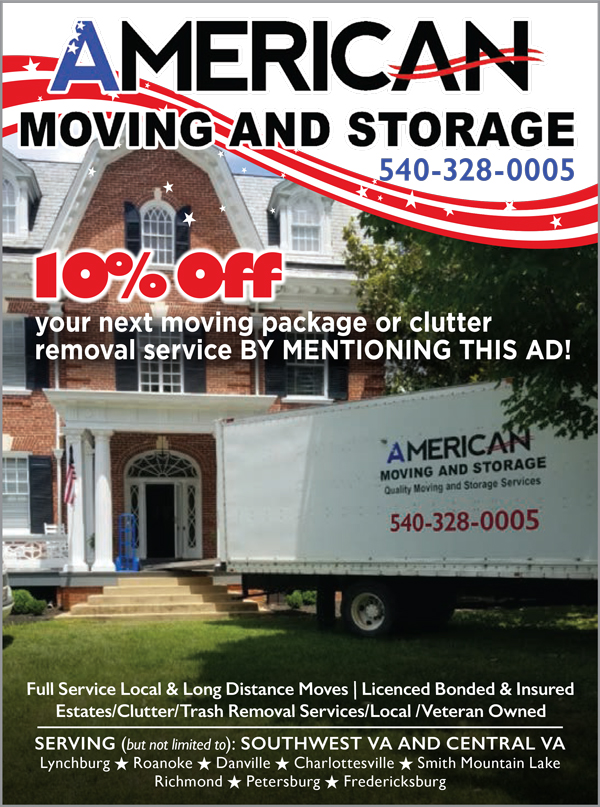