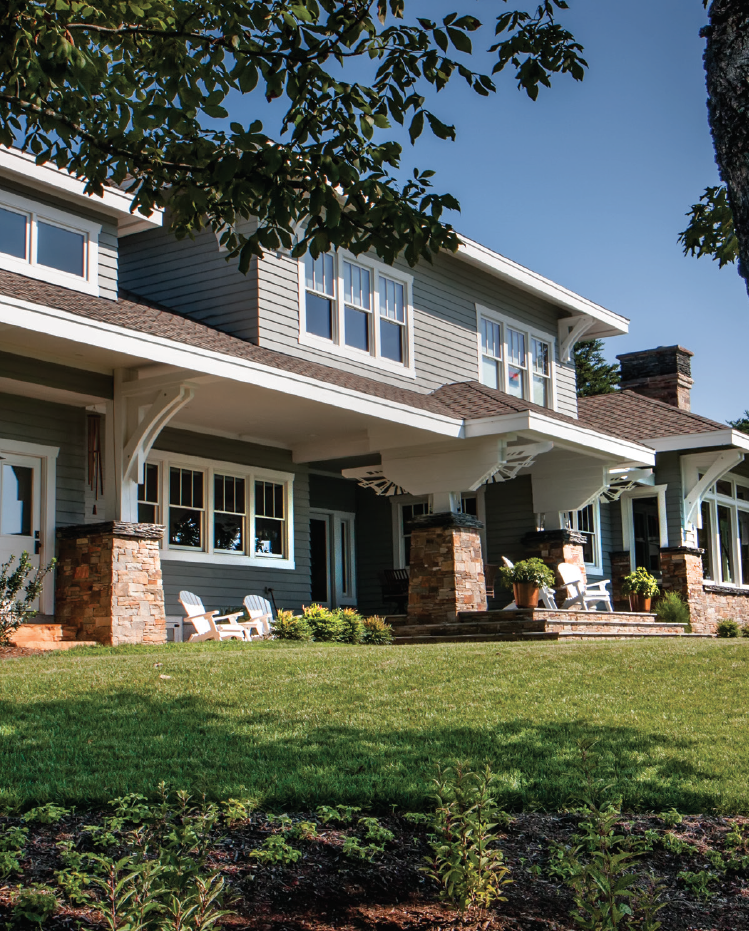 Around the turn of the decade, David Tyrrell called up custom homebuilder Zach Baldridge with a question that was anything but simple: “Want to have some fun for the next five years or so?”

The result is a stunning and completely personalized 5,000-square-foot home perched on a peninsula in Park Place. Harvesting wheat-like patterns, hand-crafting wainscoting, and channeling thematic elements from end to end, the journey was as much the destination as the final product. 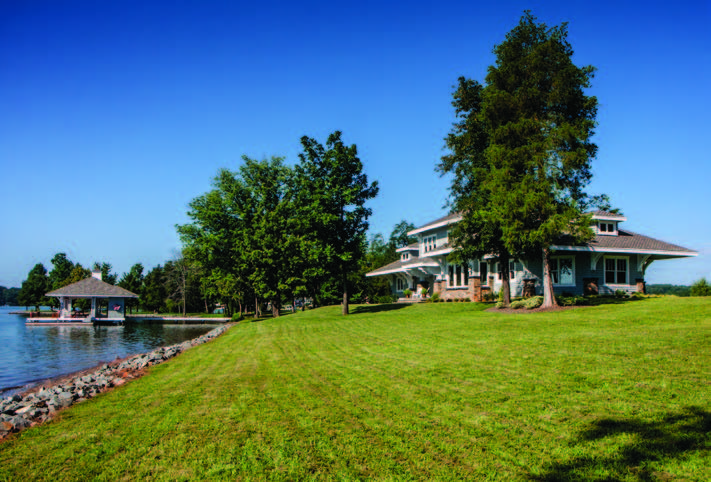 David Tyrrell and Lauren Hafner were drawn to Smith Mountain Lake about 15 years ago. They tried Missouri’s Lake of the Ozarks and other sites before working their way eastward.

“I had always wanted to come back to a place on a lake, near the mountains. It was a lifestyle
I enjoyed,” says David, a New England native who also has a home in Florida.

Despite not knowing the area well, SML drew them in. Here was the perfect combination
of scenery and serenity, with abundant available housing space. The couple purchased three lots: one in Contentment Island, one at Bernard’s Landing, and one at the northwestern end
of the lake.

The northwestern end is where they built their first lake home, but it was Contentment Island that changed the course of their lives at SML.

“I have always done my own clearing work,” David says.
“My chainsaw is my favorite piece of machinery.”

Tyrrell was clearing land at his lot in Contentment Island while Baldridge was building a house on the adjacent lot. From there, all it took was a chat, a tour and a handshake—and the foundation of a partnership was laid.

Despite having the three lots, none suited the couple for what they wanted to build for their permanent residence. With the help of real estate professional Glenda McDaniel, they found their Park Place location, an isolated lot with more than 2,000 feet of shoreline and views of Smith Mountain Lake State Park. Once they settled on the property for their dream home, they quickly got Baldridge on board.

Baldridge was the right choice for the project.

He owns True Custom Inc., a homebuilding company with a handful of employees based out of Lynchburg. He is a fourth-generation homebuilder who brings artistry and precision into the process. Carpentry and computer design skills mesh seamlessly with his creativity.

What also came in handy was his communication and collaboration. Because when David said it was going to be a five-year process, he wasn’t kidding.

“I can’t tell you how many different iterations of homes that we went through,” he says. “This house is 120 feet long, but the first plan was for one 160 feet long with a big wraparound porch.”

David and Baldridge spent two years designing the home, and construction lasted 18 to 24 months. The couple moved in in the spring of 2015 and the dock was completed in the fall.

“It was a really collaborative program, the design time between David and I,” says Baldridge, who has now built about 10 homes at SML. “He’s very creative and has lots of good ideas.”

David, a retired attorney, jokingly refers to himself as a frustrated architect—enough of one, at least, to have a working knowledge of proportions and structure. No matter where he was, he and Baldridge were sketching and sending ideas back and forth.

“I don’t know any other builder who would spend that kind of time with a client like me, going back and forth. I can get a little detail-oriented at times,” David says. “He’s willing to go to those lengths, but he also has the creative part of it.” 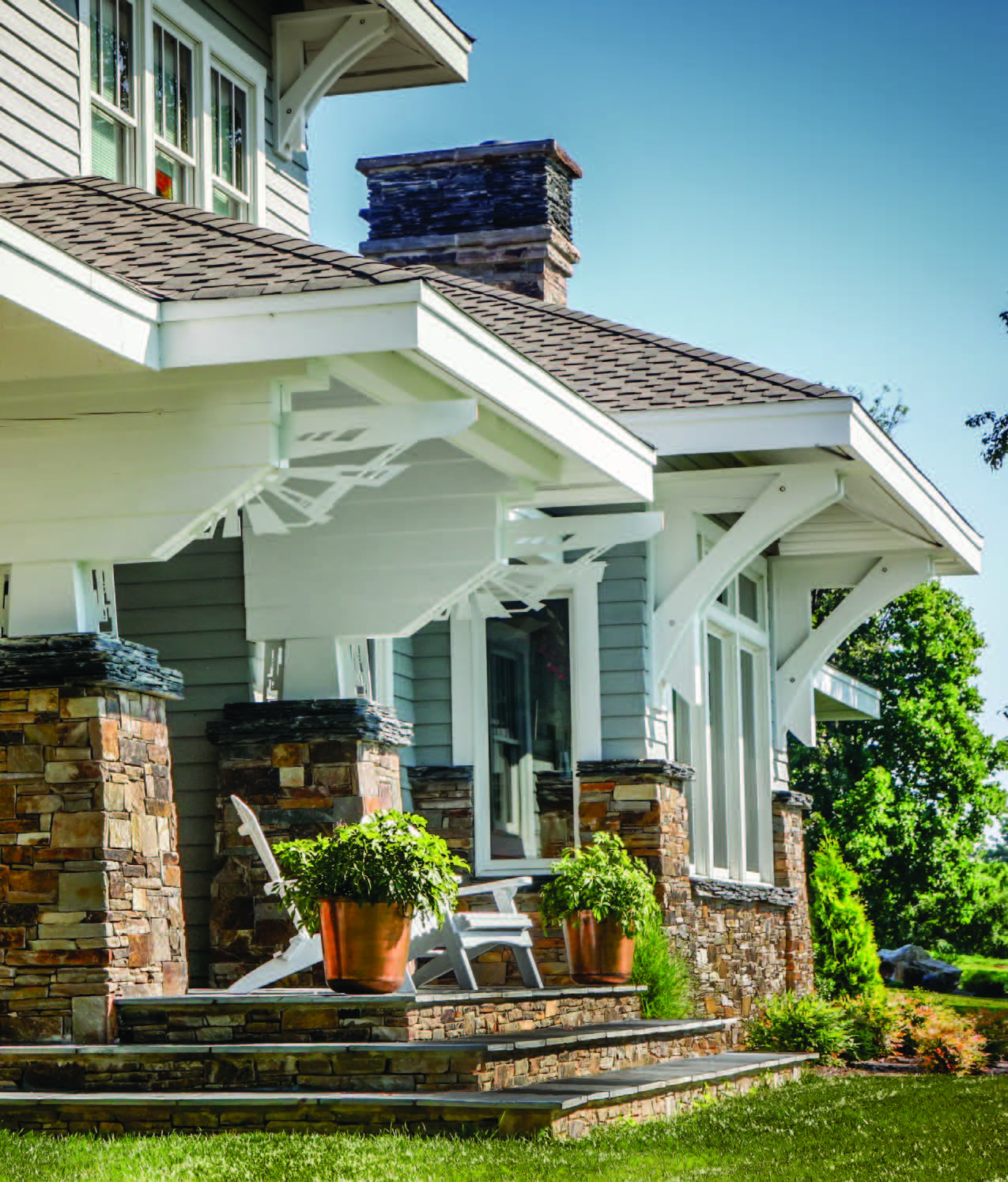 The home carries through it various wooden and metal themes, including a pattern called “wheat,” which was popularized by renowned architect Frank Lloyd Wright. Baldridge was able to fashion his own spin on the concept and incorporate it in the railings, in the glass of the bedroom doors, on the fireplace hood, in the chandelier and, perhaps most impressively, on the powerful custom-made front door.

Baldridge combined computer technology with the metal work and fabricated the specialty items in his Lynchburg shop. It allowed for distinctive details that are normally cost-prohibitive.

“I took what they liked and tried to figure out how we could make it happen,” the builder says. “I think my background with the different materials and technologies means that we find ways to create things and keep the costs down.”

Baldridge says he doesn’t want the details of a home to feel standardized—they shouldn’t be something that can simply be ordered out of a catalog. He encourages his clients to work with him in visualizing the goals for a home. Ideas came often from David, and Baldridge regularly adapted to the input.

“Ideas happen anywhere,” Lauren says. “We’d be traveling, and we’d be in a castle in Italy, and he’s taking pictures of the ceiling.” 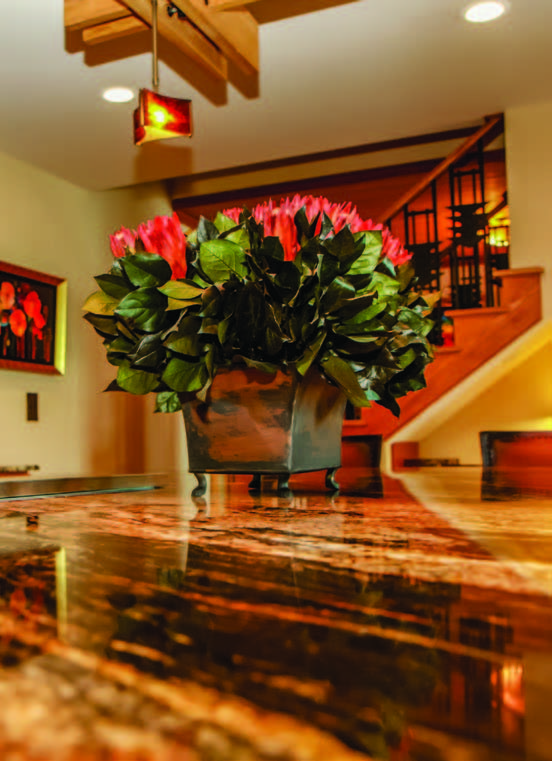 “Both of them are so detail-oriented,” Lauren says of David and the builder.

From the cozy sitting room tucked away from the main flow to the earth-toned decor throughout, very few areas in the home escape a personal artistic touch. The home’s common wheat pattern stands out in the dining room chandelier, a rectangular multi-layered creation that Baldridge custom made. Adjacent to that, an imposing stone chimney anchors the living room, complemented by a fireplace sporting a reflective copper hood. Stylized beams, indirect overhead lighting and nearly floor-to-ceiling windows (with a majestic view of Smith Mountain) make the living room an easy area to appreciate.

“If someone wants to sit down and they enjoy the process like I do of designing the house, then Zach’s the best at working through that process with you,” David says. 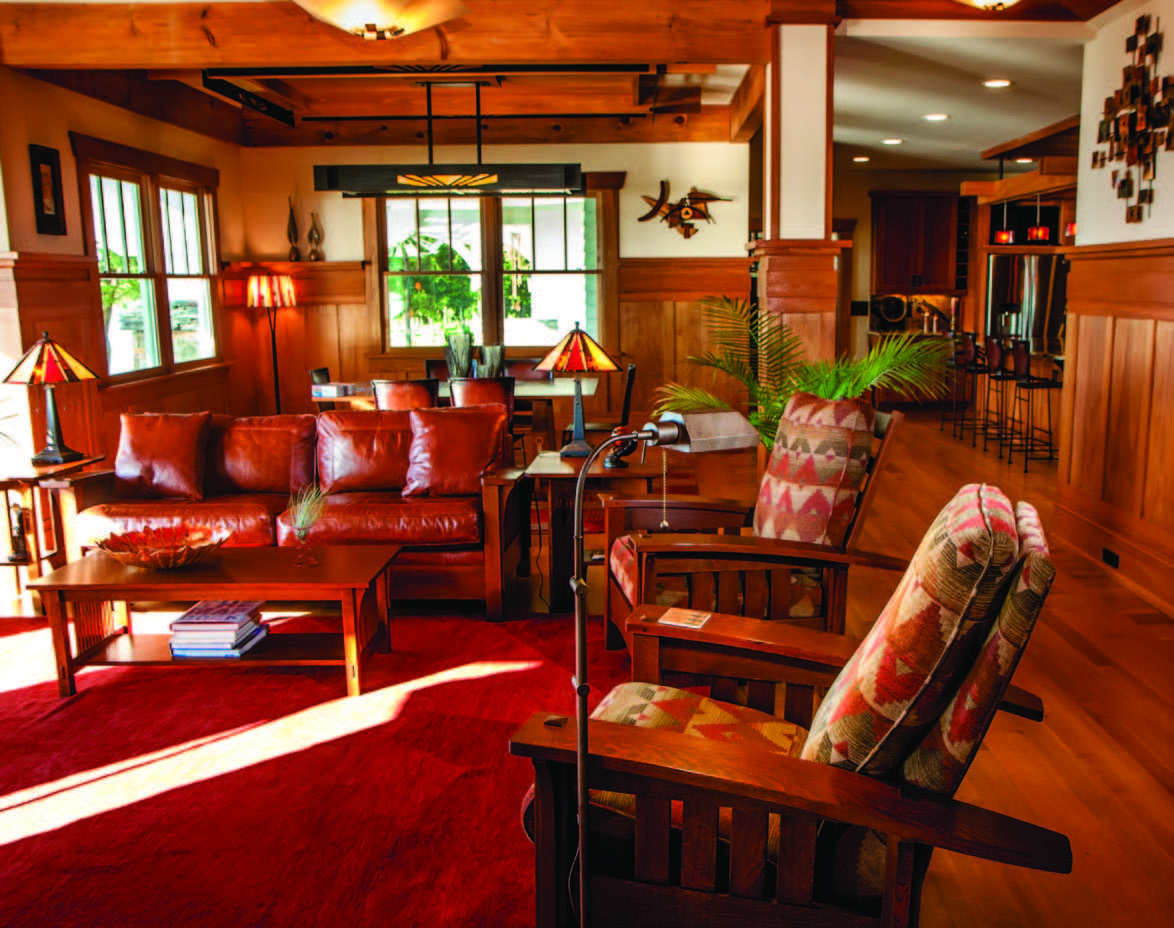 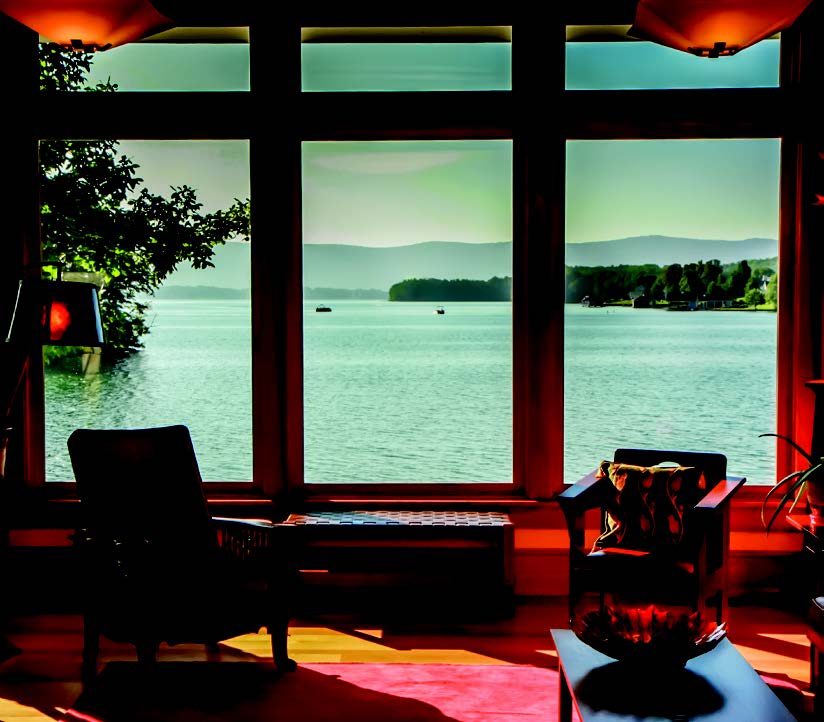 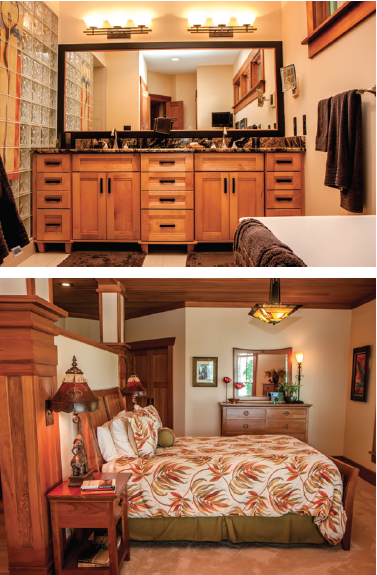 The end result has four bedrooms and four and a half bathrooms on a little more than four acres of land. The master bedroom, particularly, sets itself apart with its stained-glass doorway, center-positioned bed, and multi-directional views of the property, which are shaded by an exceptionally large overhang. The ornate master bathroom latches onto the home’s decorative artistry and won’t let go.

The second floor extends the length of the house, with a hallway that connects bedrooms and bonus rooms appearing limitless. One bathroom features unusual placement of dual sinks directly below the windows with mirrors mounted to the side that can be extended out when needed. The result is a spectacular, unobstructed view of the lake and mountain for guests.

The extensive space is crucial to the couple; the home is one that’s enjoyed not just by the homeowners but also by their family and friends. Over three months last summer, the first since the home’s completion, they entertained six rounds of guests.

“This is an active home,” David notes.

Now that the couple has lived nearly two full years in the home, it has a lived-in feel, comfortably accented by warm decor and welcoming landscaping. It’s not something that a builder such as Baldridge always gets to see. But his connection during the design and construction with David and Lauren wasn’t typical of builders.

“It was a lot of fun,” he says, “and it’s great to come back now to look at the completed, furnished, landscaped product.” 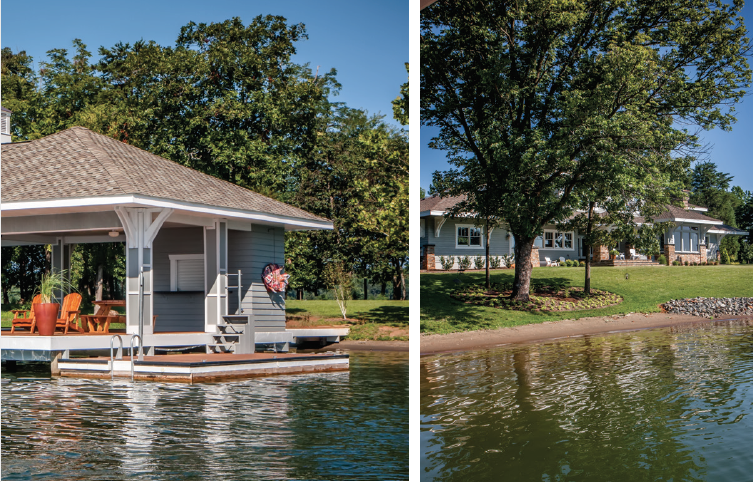 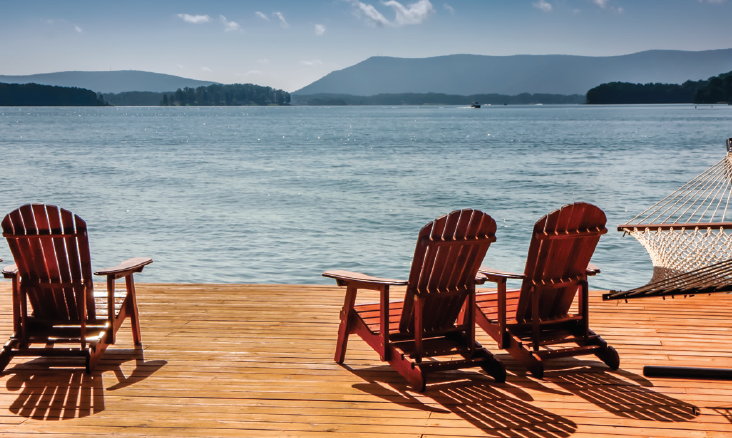 Previous Post: Say “I do” at Home | Tips for Throwing a Fabulous SML At-Home wedding
Next Post: Seamless Transition | Accomodating Ample Water Views & Frequent Guests is what this SML Home Renovation was all About