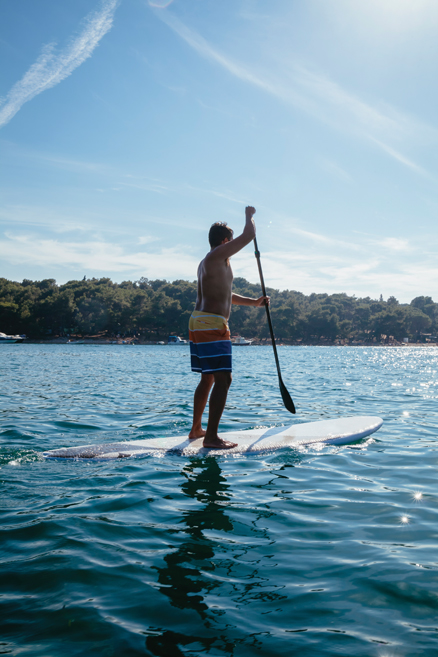 If you spend any time at all at Smith Mountain Lake, you’ve discovered how the lure of the lake’s pleasant waters can be too strong to resist. You just have to get in that water to relax, cool off and luxuriate with family and friends. For adults and kids alike, that’s where an assortment of the latest water toys can add a variety of fun improvements to your lake life.

And so we present a few suggestions to “wet” your appetite for fun in and on the water. All of these immersion diversions are of the human-propelled variety: no fuel, no fumes and no noise—save for the splashes and giggles of water lovers having memorable times together.

SML’s warm summer water temperatures—typically near 90 degrees from mid-July to late August—mean people can spend hours playing in the water without getting chilled. So the popularity of kick-back inflatable islands is not surprising. These have evolved recently, from simple trampoline-like circular floats used mostly for kid bouncing … to large foam pads for sliding and water-level sunbathing … to complex floating “climbing mountains” and mini-playgrounds that sell for many thousands of dollars. Adult-appeal lily pads now feature multiple drink holders, climb-aboard access openings and even sun roofs. In sizes up to and beyond 8 feet by 10 feet, these floats become irresistible extensions of dock or beach entertaining space.

Cindy and Mark Dougherty bought their sun-bathing island last year, their first summer at their SML getaway on the Blackwater River. “We saw it on sale for about $120 at Costco and just bought it on impulse. We enjoyed it so much that first afternoon, we decided it was worth the money for that day alone!” Cindy says. 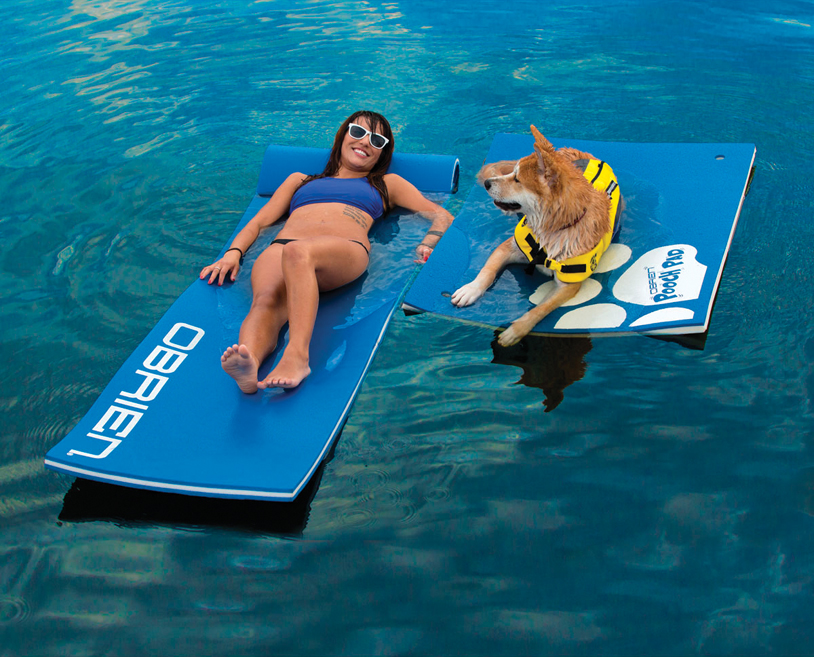 The relatively new foam-mat variety of floating islands really caught on last year, according to Jake Jacobsen, dock manager at Bridgewater Marina, an SML go-to place for water-fun items. Well-suited to kids, whose lounging often turns to (or begins with) rough-housing that can puncture inflatables, these multi-layered water carpets range from a one-person raft size up to 6 feet by 20 feet, which will handle a half-dozen sun-bathing adults.

“We had a bunch of marina employees playing on one in the Bridgewater harbor last summer,” Jacobsen says. “It nicely supported attempts at cartwheels and handstands.”

Prices range up to and beyond $799, depending on size and thickness. There’s also a companion “Pooch Pad” ($50) that features a nail-resistant surface—perfect for having Fido join the lounging party without climbing on other guests.

Manufacturer O’Brien recommends hauling mats out when not in use and provides cases for rolled storage. The larger ones require a couple of adults to handle, and take up significant floor space in a dock’s storage shed. Inflatables are more easily stored, and can be collapsed. But let them dry thoroughly before rolling them up to prevent mildew and potential damage caused by sticking one surface to another.

Somewhat smaller (yet, according to marketing photos, able to support four teens fairly high and dry) is an inflatable mat called “WOW Water Walkway.” Suited to either lakefront or pool, it sells online for under $200 at Overtons.com, a popular online retailer of boating and other watersport merchandise. 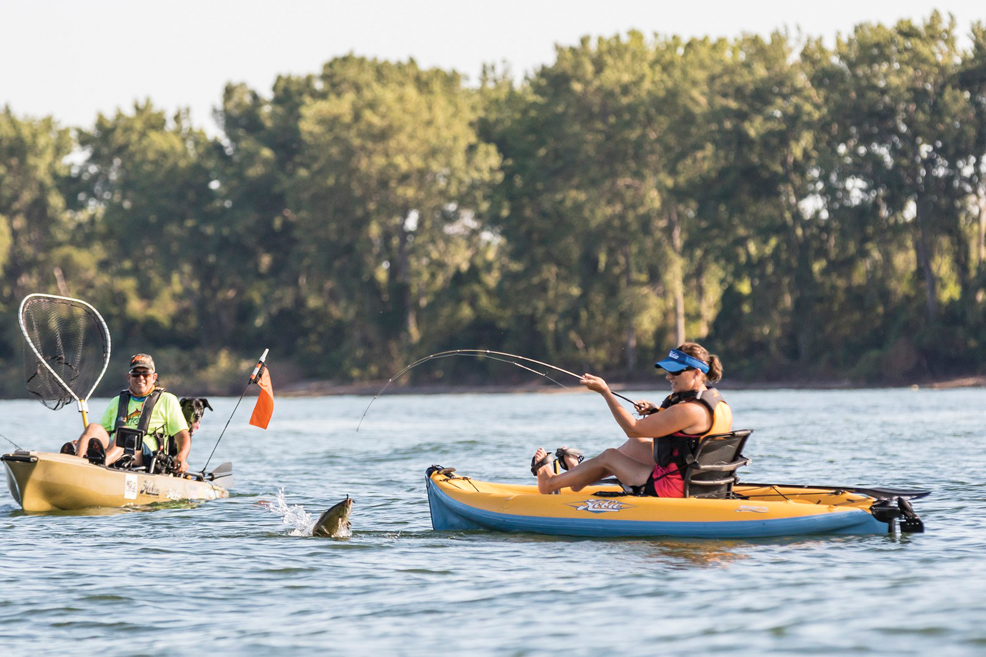 For those who want to make some headway while afloat—perhaps to explore nearby coves in search of bass or just scenery and solitude—a wide range of kayak-style paddle craft fit the bill. Inflatables, molded hulls, kayaks suited for fishing, touring or just recreational paddling—plus all kinds of related gear—can be viewed at paddling.net, presented in buyers’ guide fashion, including links to manufacturers’ websites. Local sources for shoppers who want to see and touch before purchasing include big-box discount and sporting goods stores, plus smaller outdoor outfitters. Smith Mountain Wake at Bridgewater Plaza offers made-in-Virginia Coastal Kayaks, and the Southern States General Store in Union Hall stocks kayaks as well.

Some models made by Hobie Cat now come equipped with a patented hands-free pedal propulsion and steering system. Fin-like protrusions adapt to shallow water and can be feathered flat against the kayak’s bottom for beaching. Also among Hobie’s kayak offerings is an inflatable fishing kayak—the “i9S”—that will cost you nearly $2,000 (plus substantial shipping if bought online). But reviews for the product on Amazon.com are 5-star, with one buyer raving, “Liked it so much we ordered a second.” 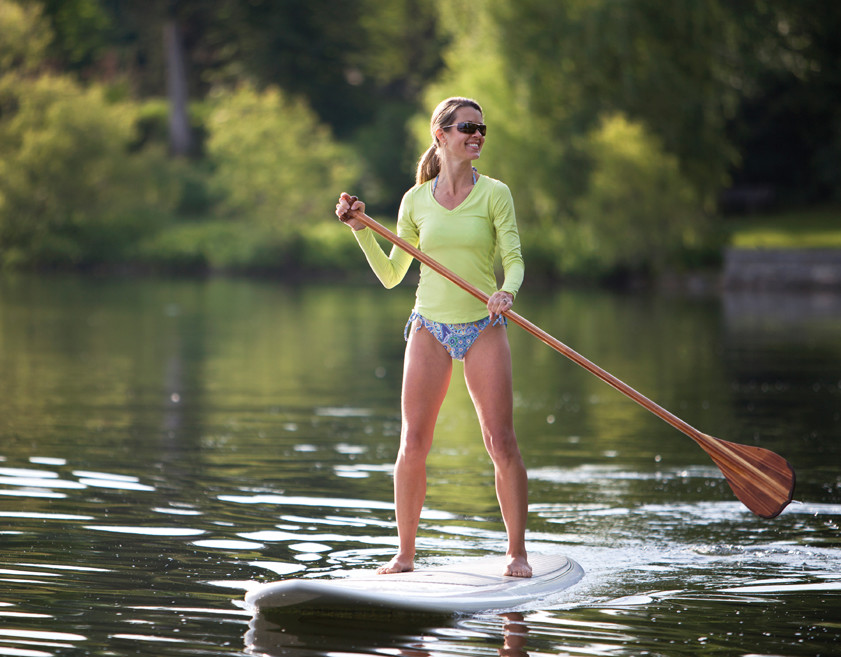 Boaters who spend any time idling along quiet shorelines know that stand-up paddleboards (SUPs) are all the rage among the summer-fun crowd. Entry-level boards are usually plastic or vinyl construction; inflatable models are more expensive, pump up amazingly rigid, will support a medium-sized adult, and can be deflated for travel or storage. SUPs can be fun toys for kids to enjoy: endless hours can be spent playing “King of the Board,” arm paddling from belly-down surf-board position, or stand-up paddling along the waterfront.

“The more advanced ‘touring’ boards, usually epoxy composites, begin in the high hundreds and go upwards to twice that,” says Ken Hayes, owner of Smith Mountain Wake. “You’ll also need a paddle, from $99 to $300. Last year was an incredible sales year for paddleboards of all types. I could barely keep them in stock.”

Virginia law requires all paddle boarders to carry or wear a flotation device. Inflatable belt-pouch models are cool and comfortable and are a good alternative once you’re confident enough to stay standing on the board. Beginners will want to use a ski vest, either worn or carried on the board at your feet. An ankle tether to keep the board from scooting out of reach when you take a plunge is also a good idea. 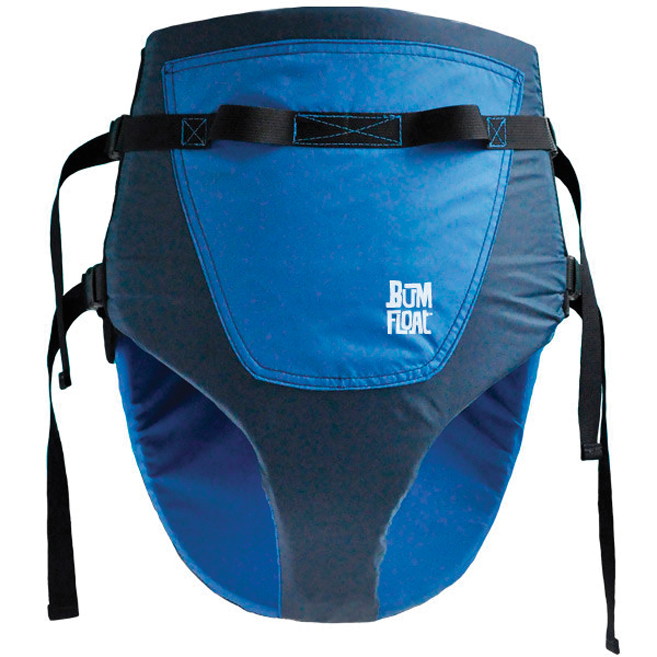 And for the Floater Who Has Everything…

Happy to be positioned at the bottom of the float-y toy sophistication scale is the new and appropriately-named “BumFloat.” Quite likely invented by an entrepreneur who observed boaters alongside their anchored boats, using life vests worn diaper-style for hands-above-water (the better to hold a beverage!) flotation support, this purpose-built solution works the same but is designed for comfort and easier on and off. You can probably be the first in your cove to have one of these; the conversation-starter value of the name alone is well worth the $50 ($60 in standard or pink camo) suggested retail at bumfloat.com. Or check out the even simpler O’Brien Water Saddle, available at the Bridgewater Marina store.

Are you ready for summer at the lake? From splash pads to paddleboards, there’s a toy for kids of all ages.

Previous Post: A Retreat With A View
Next Post: Pack A Better Picnic: For The Boat, The Dock, The Island 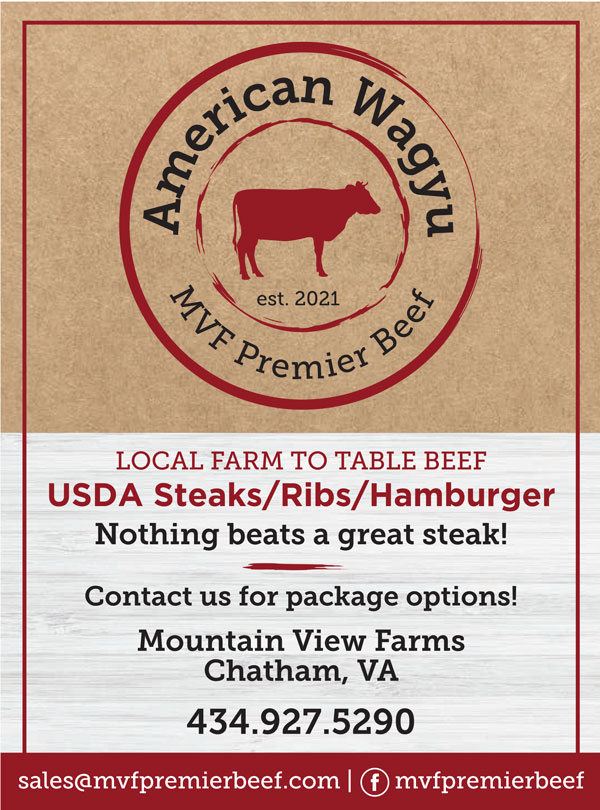