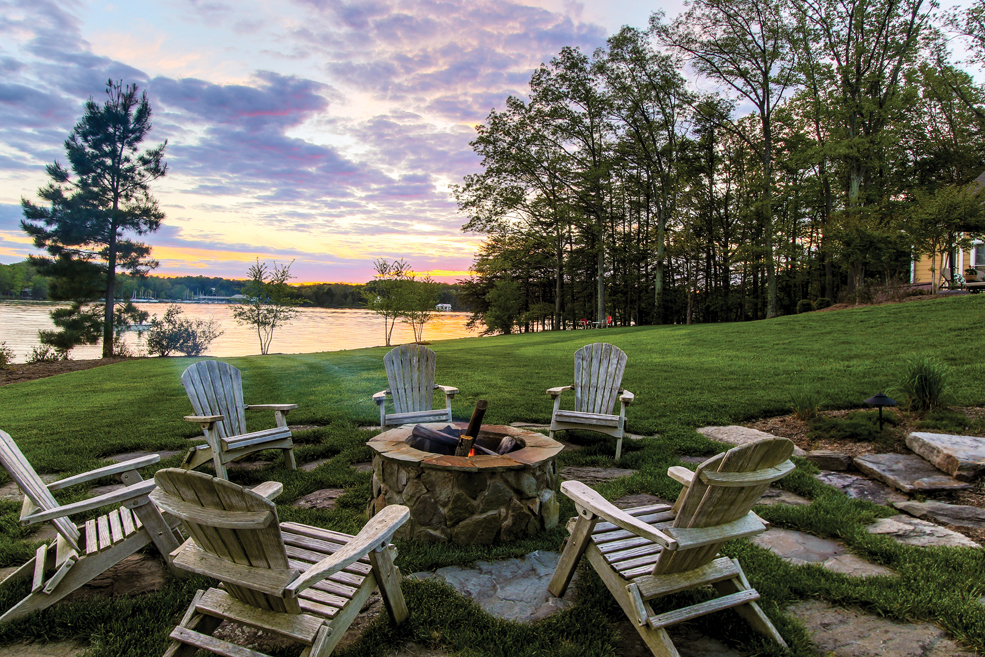 Valerie and Mike Lyons have a routine. It’s more of a tradition now, really—something they do after completing the four-hour trek from their home in Northern Virginia to their lakeside retreat in Bedford County. They just can’t help themselves. Regardless of how late it is when they arrive, the Lyons drop their bags at the door, cut through the living room and make a beeline to the back yard.

“I just stand on the patio and look at the water and the view,” says Mike. “We just soak it all in and think: ‘Take a deep breath. We’re at the lake now.’”

And with a view like this, who could blame them? 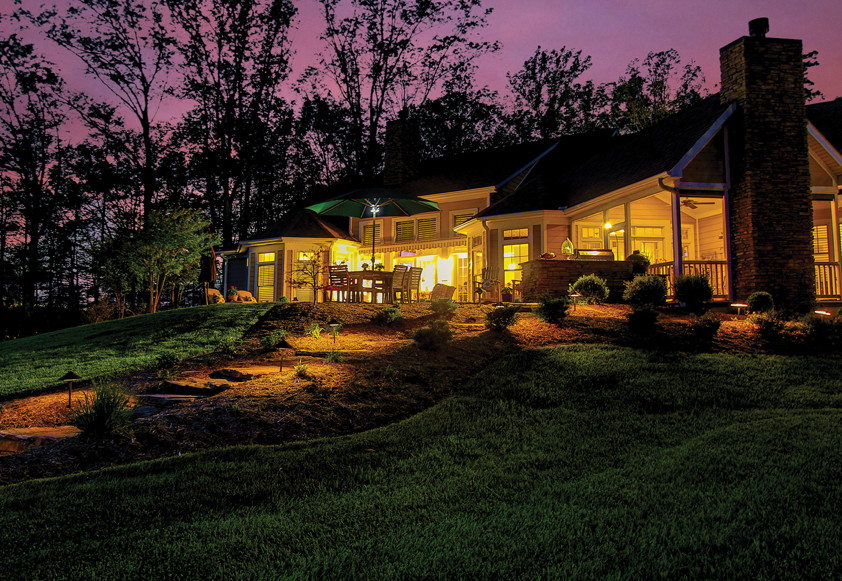 Built on a point near the base of Craddock Creek, the home is nestled close to the water and offers a panorama of Smith Mountain. For the Lyons, it’s a peaceful escape from the hustle and bustle of Northern Virginia.

“Whenever we have guests arrive, and we open the door, and they look straight through to the lake, their mouths drop open,” Valerie says. “Then they say, ‘OK, now I get why you drive four hours.’”

The couple first discovered SML about 15 years ago and instantly fell in love, purchasing a condo at Mariners Landing in 2004. While out on their boat, the Lyons would frequently admire the lot where their home now sits. They finally decided to make an offer, snagged the property and began planning their dream home.

“We thought we were going to retire, but that hasn’t happened yet,” jokes Mike, who works part time as a consultant in the healthcare sector. Valerie, an executive vice president at CACI International, an information solutions and services company, says she immediately purchased a number of house-plan magazines to search for inspiration.

“I would go page after page after page until I finally narrowed it down to one that worked for us,” she says, noting that a big consideration was a one-level floor plan that would support the couple as they aged. 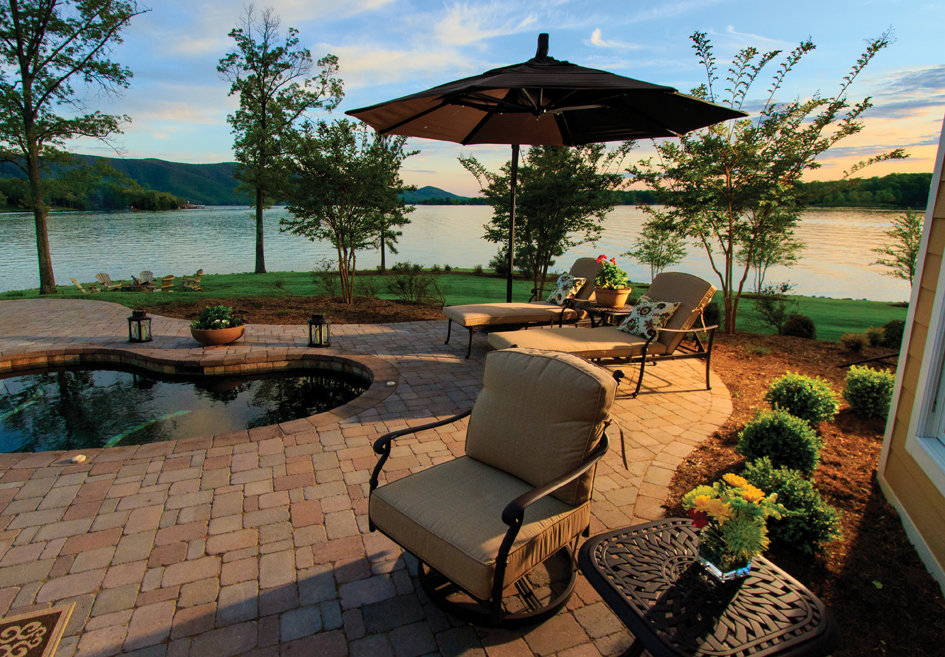 In 2009, the Lyons hired North Carolina-based Schumacher Homes to build a custom home that would suit their needs while taking full advantage of the view. The house has four bedrooms and three-and-a-half bathrooms in 3,500 square feet with all the main living areas facing the lake. It comfortably accommodates the couple, as well as their two adult children and a close circle of friends who visit frequently from Memorial Day weekend well into the fall.

Decorated throughout with a soothing palette of teals, greens, browns and creams, the home definitely has a serene vibe—not coastal or rustic but something that embraces the feel of water and mountains. Valerie did much of the decorating work herself, collaborating with long-time interior designer friend Kim Casson of Salmon-Casson Ltd in Reston, and, locally, the staffs at Interiors by Kris and Blinds & Beyond.

Valerie says, “I definitely didn’t want it to be a [more formal] NoVa-style house. It needed to be comfortable and casual, but it still needed to be pretty. Mike coined the term ‘lake-y’ – a water feel that brings the outside in.” 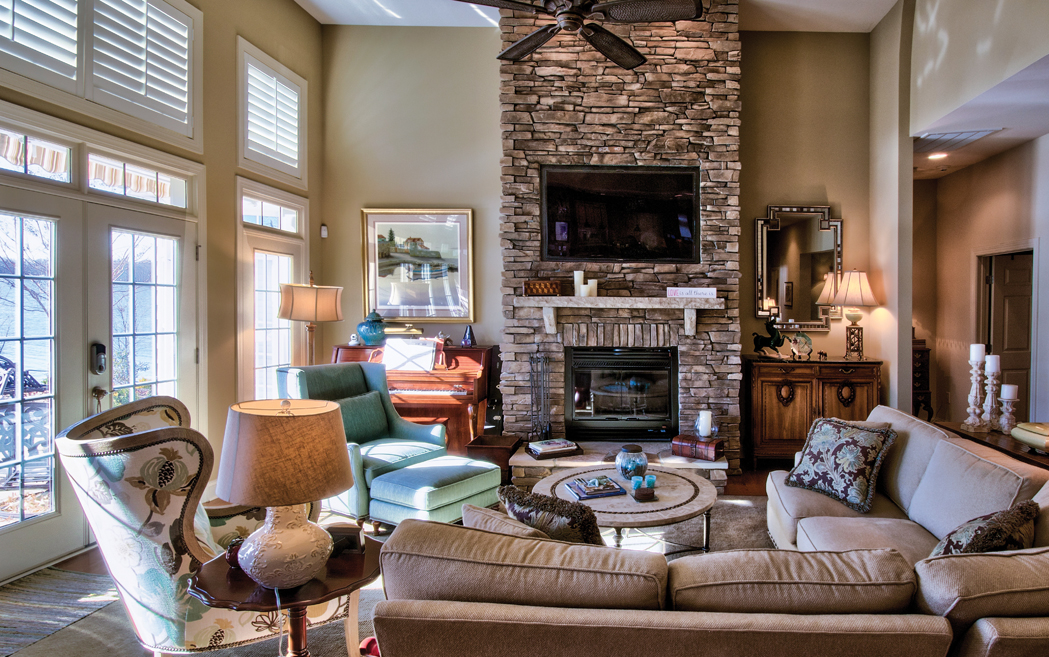 “We don’t use the breakfast area much for food. It’s more for having coffee, playing games or a place to gather for cocktails,” Valerie says. “In fact, that’s one thing guests have commented on about the house is that there are so many different places to sit and relax.”

Huge windows let abundant morning light stream into the great room, which is dominated by a massive stacked-stone fireplace. An L-shaped couch and chairs in coordinating teal-and-brown fabrics complement the “lake-y” feel of the room.

The kitchen is warm with cream-colored glazed cabinets, granite countertops and top-of-the-line appliances. The Lyons are self-proclaimed foodies, with Valerie handling the indoor cooking and Mike in charge of the outdoor grills. (Yes, plural. More on that later). 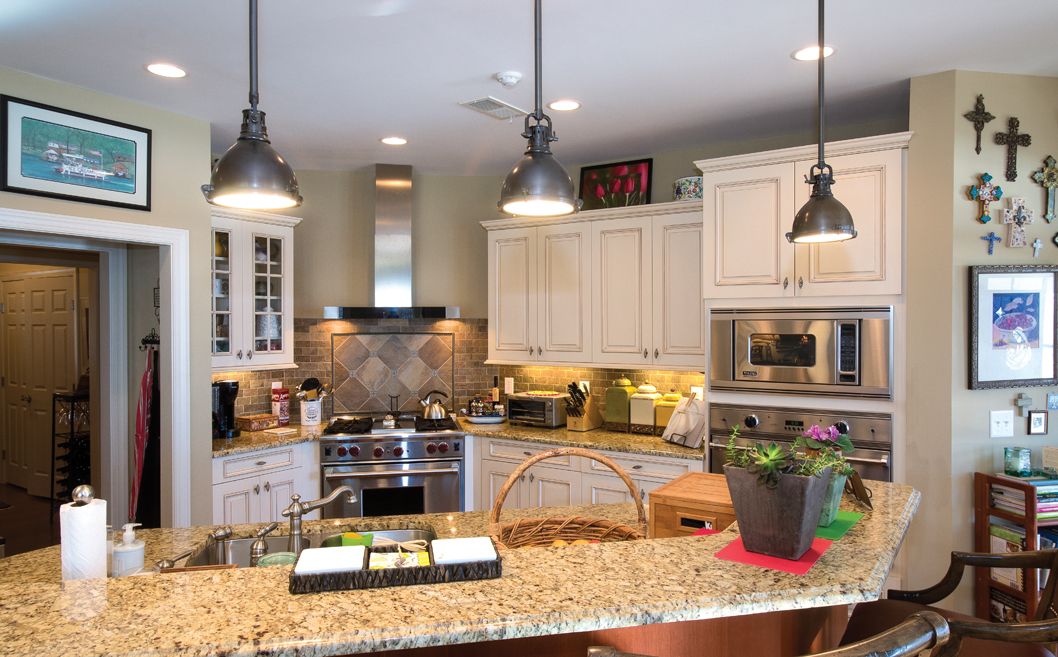 “I had to have the Wolf stove with the red knobs. And the ice machine and wine fridge in the back hallway were critical,” says Valerie, pointing out how the appliances come in handy when the couple entertains, which is frequently. Also convenient is an adjacent pantry where tableware, linens and decorations for every season and entertaining style are stored along with non-perishable foods.

But as much as she enjoys spending time in the kitchen, Valerie says her favorite part of the home is the screened-in porch. Accessible through French doors just off the kitchen, the space includes comfortable seating and a floor-to-ceiling wood burning fireplace that matches the one in the living room.

“I don’t care how many people we have at the lake—everyone tries to jam into the porch,” says Valerie, while Mike points out it’s the perfect spot to gather on cooler evenings in the spring and fall. 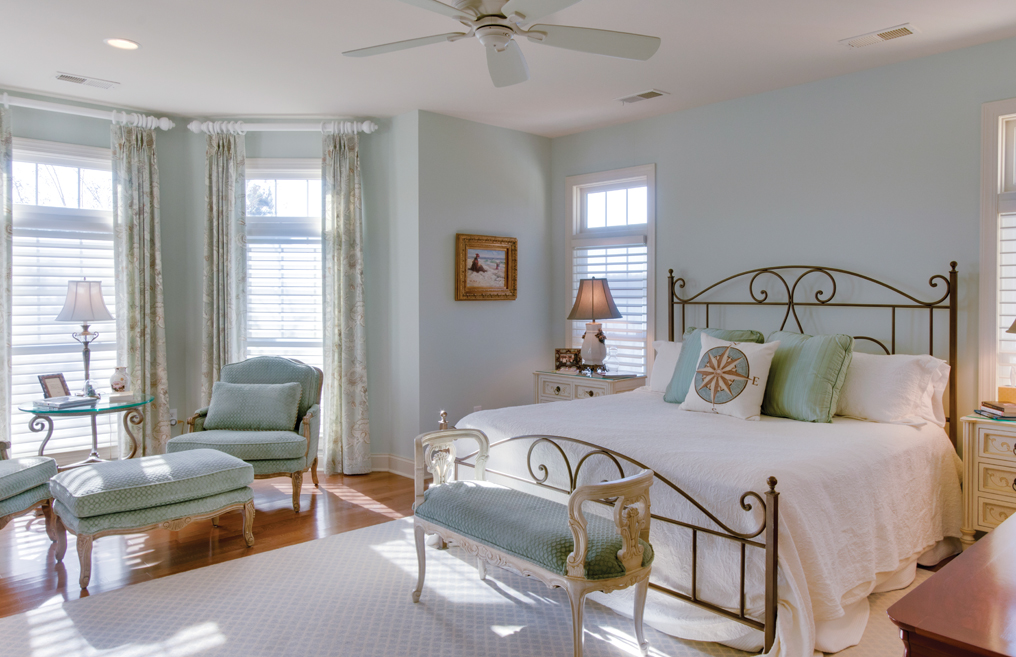 On one end of the home is the master retreat with a spacious bathroom and a sitting area overlooking the lake. The walls are painted a soft teal and the bed features an iron headboard and footboard softened by fabrics in colors that complement the home’s palette.

The opposite side of the house is where you’ll find two guest rooms separated by a shared Jack-and-Jill bathroom. One bedroom, as well as the bathroom, continues the teal/brown color scheme while the other is more of a departure with reds and blacks worked into the fabrics and artwork. Photos of family and friends decorate both spaces. In the hallway is a piece of art with one of the couple’s favorite sayings: “If you’re lucky enough to be at the lake, then you’re lucky enough.”

Overflow guests can hunker down in the finished bunk room, which occupies about half of the home’s three-car garage. This room also houses what Mike refers to as the “legacy cabinet,” which displays family mementos such as toys that belonged to him and to the couple’s children, vintage dolls and cameras. Also on display are antique clippers and a shave brush, which belonged to Mike’s dad who was a barber by trade. 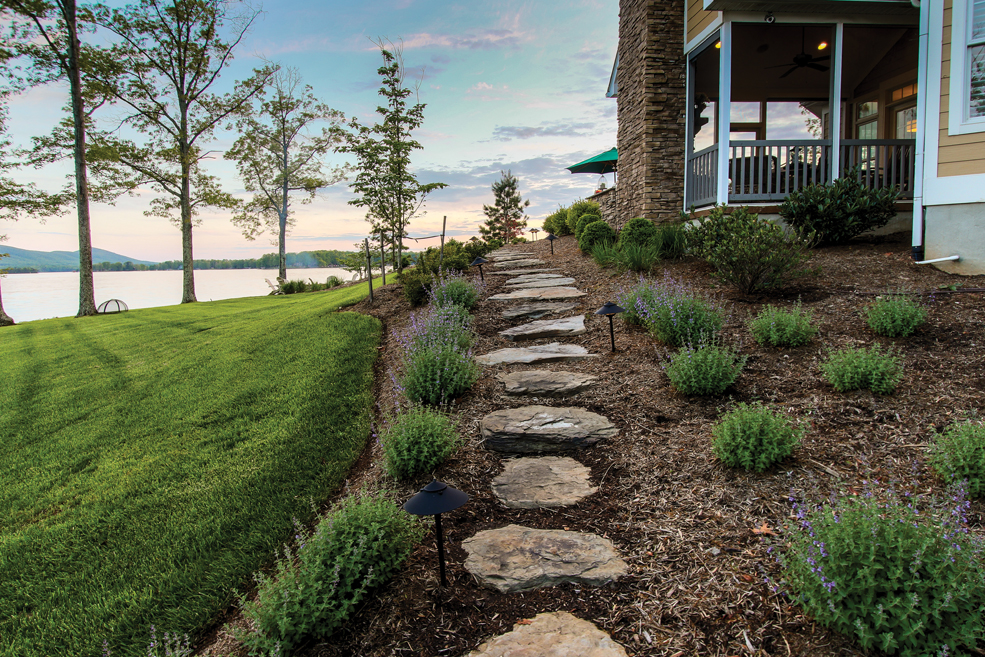 In the summer, the Lyons gather frequently with family and friends by the water where there’s a two-slip boat dock, boathouse, floating dock and stationary dock equipped with comfortable furniture for long days spent lounging. Nearby is a hardscaped stone firepit surrounded by Adirondack chairs.

“We really like to be down there in the evening time in the summer,” Mike says.

Back up at the house is a large paver patio with multiple seating areas and an all-weather outdoor kitchen with gas grill and a Big Green Egg.

“Mike’s grill capabilities needed to be recognized,” jokes Valerie. “We always cook our evening meal outdoors and we usually use it for breakfast or a mid-day snack.”

This is actually the home’s second patio. After moving in, the Lyons had issues with cracking and decided the original patio wasn’t going to cut it. They called on Mark Maslow’s team at Evington-based Southern Landscape Group to design and install new hardscaping, the firepit and extensive landscaping. 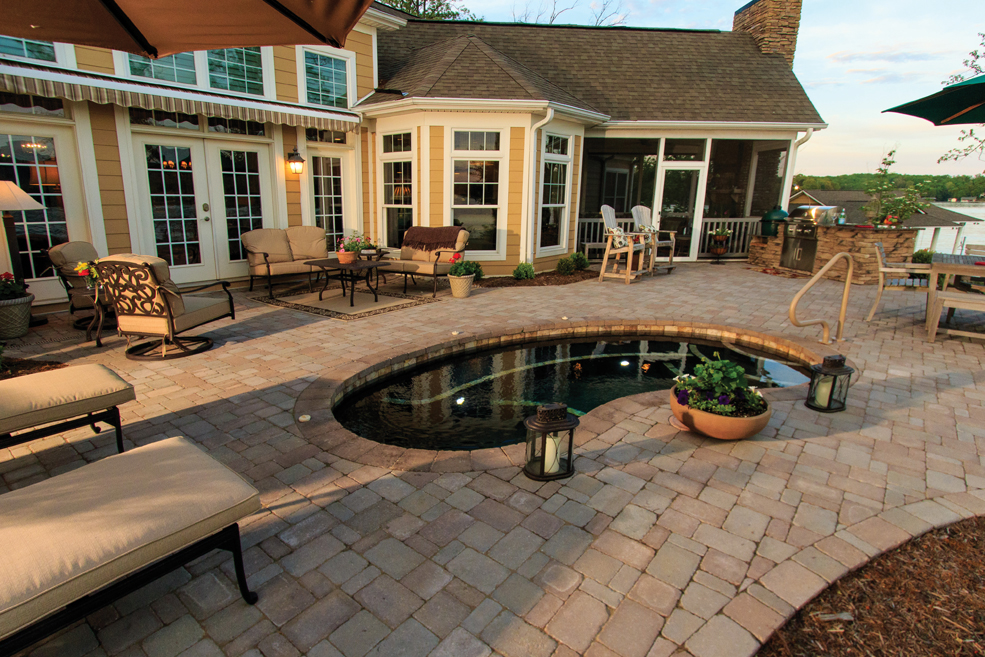 “I can’t say enough good things about Mark,” says Valerie. “He committed to having it done by the Fourth of July, and they were here working [late on July 3] to make it happen. He committed to that, got it done and it’s beautiful.”

That patio also includes an endless pool where one can relax, cool off or swim against a current for exercise. Designed and installed by National Pools of Roanoke, it also doubles as a hot tub with bench seating with a view of the lake and mountain—a big hit with guests, Mike says.

The landscaping includes a variety of trees and shrubs designed to be low maintenance.

“I needed it to look beautiful throughout all four seasons but not take a lot of effort to maintain,” says Valerie. “So he [Mark] helped with the design, looking at it through that lens.”

Mike says there’s not too much about the property—outside or in—the couple doesn’t like.

“There’s a sentiment about the house that makes it special. It’s a great gathering place,” he says. “You can relax and enjoy the beauty of the lake or you can be as active as you want.”

Previous Post: At Home With The Barbers: Living Lake Life To The Fullest
Next Post: Water Toys: Floating Fun To Amp Up Your Waterfront Game 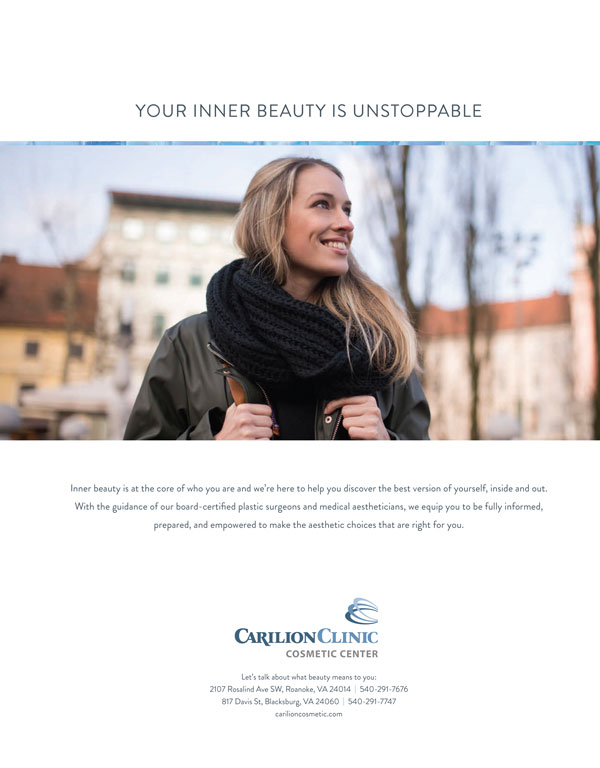